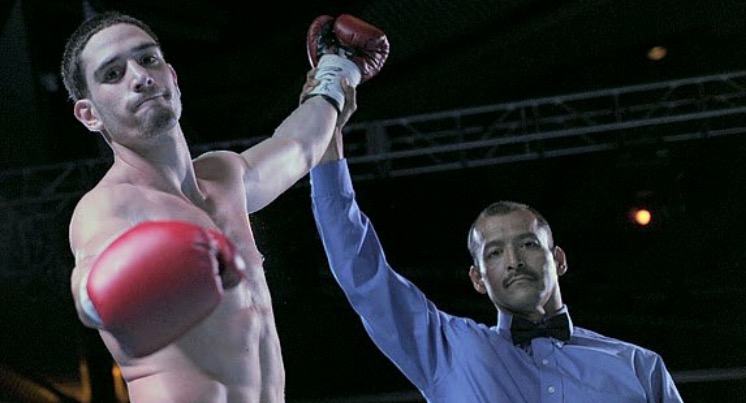 She worked three jobs in this city which never sleeps, the place where you know if you make it here you can make it anywhere, but a region where the cost of living is inhospitable even to people who'd be considered sort of wealthy in other areas of the nation.

There were three boys to feed and clothe and keep roof overhead, so Luma Halili worked and kept on working and juggled as best she could to keep everyone afloat.

And the three boys noticed and appreciated. The youngest, Skender, age 25, something especially clicked in his head.

Halili is of Albanian descent. He lives with mom, who is a hairstylist, in the Bronx, and is backed by Queens based advisor David Schuster, of Winner Take All Productions.

Schuster is a NY businessman with boxing in his blood, who works in concert with promoter Greg Cohen. They've been getting more than decent traction with fights on CBS cable and ShoBox, and the like, in the last year.

The Halili family, fighting is in their bloodstream as well. Dad Ray did kickboxing and the boys became gym rats. Big bro Enver fights out of Texas and is 8-0 as a pro. “I tried to get away,” said Skender, with a chuckle. “But I couldn't. This is what we do.”

Skender hooked on with Schuster in 2012. He was training at Church St Gym in NYC and a guy there was impressed and poked Schuster, alerting him to this hammer fisted kid with over ample cajones. “David gave me an opportunity to fight on his show on Long Island that May,” the boxer recalls. “I can't say enough about David Schuster, he gave me an opportunity and I'm very thankful for that, when nobody else would. He knows what I'm capable of and I can't thank him enough for the opportunity…he is the man.”

Schuster, who has put together fight themed charity events and backed Off Broadway productions, dipped in and out of the sport and he came back hard with Cohen more than a year ago. Halili had been living and training in Texas, but realized four months ago NY is where his fighting heart belongs. “Skender sent me a letter, saying he wanted to come back here. He lost once, in Texas, and he came back and we gave him a shot. He fought in Atlantic City, and he did what he promised. I believed he was and is sincere, gives everything he's got.”

That fire and fury is important to a guy who dug the Grazianos and Durans and Antuofermos, adored the willingness to test self to the utmost, possible smudge on the record be damned. “You can't teach someone to be tough,” Schuster said. “Skender is tough!”

Halili tells me his top traits include a hurtful jab. Sometimes he uses it as bait and drops the right hand hammer. “Then he's going to sleep, night night.” That's maybe the Albanian in him…”Being tough is a thing we are known for. Sometimes we have too much balls! We feel like we can beat anybody!”

His trainer, young Jason Stout, is a Wisconsinite living in New Jersey. “Skender has power like I have never felt before. The power is unreal. He punches someone, they fall asleep, they just melt!”

He's wanting Skender to be a well rounded boxer, not be overly reliant on the power. “Sometimes he's a little too tough for his own good, he likes to fight, mix it up,” Stout told me. And guess what, that makes for a fan friendly type, a throwback model to the Grazianos and such.

So what is next, after that Feb 19 win over 11-1 Anthony Young, who maybe was the favorite going in?

“In that fight, the first round I was rusty, it took me awhile to get going. In the second round I caught him with a big shot, he stumbled and that got my confidence up. I knocked the rust off, and went for the kill,” Skender said. “It was a good win. The crowd was against me and by the end they were kind of cheering for me.”

He's thinking he's started a new win streak after dropping a decision in April 2015. “My first defeat, I was not at home. I had no rhythm.”

He sounds like he's in the top tier if you are measuring motivation. “I'm looking to make it at 147.” He appreciates advice from manager Adrian Clark as he negotiates the fistic waterways, he also informed me. “I'm in boxing for me, but I want to help my mom open her own hair salon. I feel like it's do or die, I have to become someone in boxing. I have no nine to five, I am just concentrating on boxing. It's tough, my mom pays the bills, wants me to focus on boxing one hundred percent. I will help her as much as I can when I make it. I want her to have a lifestyle where she doesn't have to stress. Her support means so much. All the stuff she's been through!”

Skender is looking to maybe fight on the April 15 Dmitriy Salita card at Turning Stone in Verona, NY and he wanted to finish giving another shoutout to Schuster.

I get it, in this concrete jungle, so many hurdles to climb, having those true believers, like mom, like the advisor, it can be the determinator of making it, or getting broken.

“I can make it here, I can make it anywhere,” Skender said. “David, again, is the man…Yes, there's something about here, I have to do it!”

Related Topics:David SchusterGreg cohen
Up Next