Who Won the Weekend? Does JOSHUA Get The Nod, Or Did Ruiz' Condition Lessen the Feat? 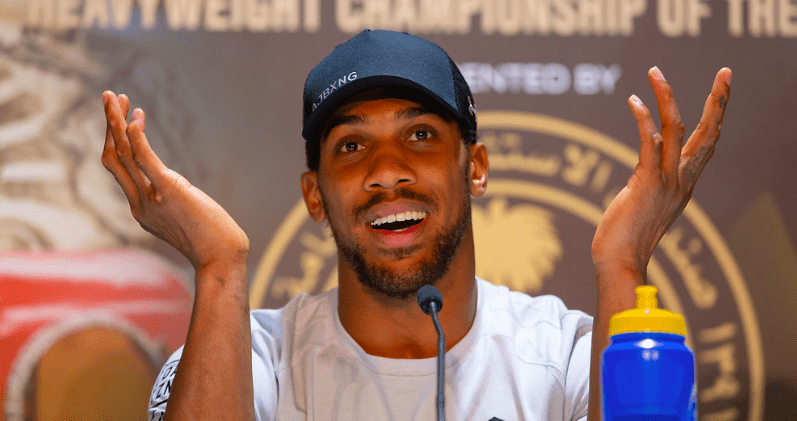 We let things sift a bit more than usual, let people consider all the angles from all the fights that occurred on Friday and Saturday. Anthony Joshua felt on top of the world Saturday…but as more time passes, more people are considering the nature of the being he was facing in Saudi Arabia.

Andy Ruiz was half the man, as far as being on top of his game, on Saturday that he was on June 1. He was too much of a man, way too heavy, to be able to prosecute the bout in a way that would seriously challenge the Brit. And he talked some too tall smack and hype talk, in light of his condition, it must be said.

So, we put it to the NYF squad Monday morning…who won the weekend, gang?

“I am going to say that Jermall Charlo won the weekend,” said Abe Gonzalez. “Last year, the Charlo brothers popularity and profiles were super hot which included a GQ magazine spread. Since then, they both cooled off a bit and the bigger Charlo needed a signature win to once again have his name thrown in for potential big fights in 2020. Jermall Charlo did just that by knocking out Dennis Hogan on Saturday night at the Barclays Center in Brooklyn. He looked impressive and reminded everyone why fans were excited to see him fight not too long ago. Let's just hope that boxing politics does not get in the way of him facing the attractive names in the middleweight division.” “It might not have been as emphatic as some might have liked, but Anthony Joshua's boxing clinic against Andy Ruiz makes him the clear winner of the weekend in my eyes,” said David Phillips. “In fact, if you are Tyson Fury or Deontay Wilder, Joshua gave you something new to worry about. Before Ruiz 2, there were questions about Joshua's chin, heart, and most significantly, his discipline. Joshua had never needed a Plan B in the ring until getting TKO'd by Ruiz a little over six months ago. He took that embarrassment, went back to ye olde drawing board and came back with a brand new plan. You could simply call it “boxing.” And he did it beautifully. It's not certain if he can do this for more than one night, but the fact that he never wavered from his strategy for 12 rounds on the most important night of his boxing life bodes well for the future. It's hard to imagine after being dealt a devastating defeat earlier this year, but it's quite possible that Anthony Joshua is going to be a much better fighter than we thought he might prior to his loss to Ruiz. And I'm pretty sure most of us were of the mind that he was going to be pretty great before that.”

“I thought Anthony Joshua's performance against Andy Ruiz was near-perfect, and that's all the more impressive since so much pressure was on him to get the big win,” said Kelsey McCarson. “Joshua boxed beautifully in a way most people probably thought he couldn't, and he refused to let himself be dragged into a firefight the way he did the first time around. Joshua won the weekend with his career-defining rebound from one of the biggest upsets in boxing history. ”

“Mr. Anthony Joshua won the weekend,” said Josh Friedman. “Say what you want about how he won but the bottom line if he won, convincingly, and can make a legit claim to being the best HW in the world.  The Wilder/Fury fights are back on the table for him.  He's in a far different spot now than he was in June 2nd.”

“AJ! It was beautiful to see someone suffer a big loss and then come back having learned from it,” said Rachel McCarson. “And that was clear. Joshua was a different fighter and had grown as a person. This was visible in the ring and outside of it. I am so grateful to be a witness to this. And the discipline on display in the ring—wow. Really admirable to see him fight to win and not slipping into fighting how he wants.

All that said, this weekend might be a huge win for Ruiz as well. The story I make up, because I can identify with it, is that he came into a lot of money and fame with the win last June, but didn’t have the skills to handle it. This loss might help him build those skills, and that might prove to be the higher good overall.”

“Eddie Hearn, Skipper and the crew at DAZN were the real winners,” said Jonathan Leir. “Heavily leveraged and chips pushed all in, a loss for Joshua would have been a unmitigated disaster costing countless millions. A good victory for Joshua no doubt. But a must needed win for those financially invested in DAZN.”

“This weekend belonged to Anthony Joshua alone,” said Jeremy Herriges. “He redeemed his loss to Andy Ruiz Jr. and helped to re-secure the confidence he lost in June. He changed his strategy and boxing philosophy. The fact that Joshua cut his weight to a trim 237 pounds shows that he's embracing the role of a boxer and not the limitations of a pure power puncher. Joshua proved that he's versatile, and he regained his titles while making a boatload of money in the process. His chin is still suspect, but if he can work behind the jab and move around the ring, then he can continue to protect his flaw.”