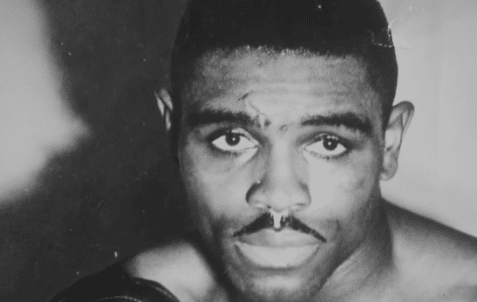 Greater love hath no man than this; that a man lay down his life for his friends. (John 15:13)

Rudell Stitch died on a Sunday – June 5th, 1960 – the day before he was to sign for a rematch with the number one ranked welterweight in the world, Luis Rodriguez. Stitch’s record was 27-7, with 13 of those wins by KO, and Ring Magazine consistently ranked him as one of the top five contenders in his division.

Stitch was Rudell’s nickname as well as surname, and he grew up in the tenement section of Louisville, Kentucky. Fighting mainly in the Louisville area in the early part of his career, he had one bout in St. Louis while a sparring partner for Virgil Aikens, and beat Kid Fichique in Havana. Stitch (click here for his BoxRec) would eventually get to see a bit of the world through his boxing career, fighting in Sydney, Australia, and Honolulu, Hawaii, as well as New York’s Madison Square Garden. A natural welterweight who had trouble finding guys who would fight him at 147 pounds, Stitch would regularly fight middleweights and even the occasional light-heavy. This explains a few of his losses, and also why such a hard puncher would often win fights by decision, rather than early.

He was so frustrated with the lack of progress in his career that he considered, even as late as 1958, leaving boxing behind. Rudell Stitch had a full life – employment at a meat packing plant, prominence as a member of Grace Presbyterian Church, and a family life with wife Rosa Mae and six children, five boys and a girl. Rudell III, Donald, Rodney, Perry, Darryl Lamarr, and Janet Lynn. Three of the six kids with mom and dad.

But his knockout of middleweight Charlie Cotton, who had beaten the likes of Joey Giardello and Henry Hank, would prove to be Rudell’s big break, and when he beat the then number two ranked Isaac Logart, Stitch would find himself regularly fighting in New York. The Garden is where he first fought Gaspar Ortega. He beat Holly Mims in New Orleans, as well as guys like Yama Bahama and Tombstone Smith. He would lose a split decision to the great Rodriguez in August, 1959, and split a pair of fights with Ralph Dupas.

Rudell Stitch was a busy man, rising at 3:30 AM for his roadwork, working his shift at the packing house, and then training at manager Bud Bruner’s gym on Shelby Street for a couple hours. He fought twelve times in 1958, and eight in 1959. He liked to fish for relaxation, especially on the Ohio River, near McAlpine Dam.

He would fish the rapid water created by the dam’s spillway. It is not the safest way to fish, climbing out on a slippery concrete ledge to the middle of the river – wearing chest-high waders, rubber boots, and a raincoat to protect from the water pouring over the top of the dam – but that’s where the big fish would congregate, lying in wait for their food to be brought to them by the liquid conveyor belt.

In 1958, Stitch rescued Joseph Shifcar of Elizabeth, Indiana, when Shifcar fell in to the river near the dam. Stitch was a good swimmer, and jumped into the river to pull Shifcar out. He was awarded a Carnegie Hero Medal for risking his life to save another, the first of two such awards Stitch would receive. He is one of only five people to have received the award twice in its over 100 years of existence.

The excitement about the upcoming Rodriguez fight hopefully leading to a title shot with new champion Benny Paret was a nice turn of events for Rudell Stitch. 1960 had begun with a January fight in Chicago against the then undefeated Carl Hubbard being cancelled, and Stitch’s license to box being suspended when the Illinois Athletic Commission doctor noticed a cataract in Stitch’s left eye. The larger concern was that other states might abide by the Illinois ruling and similarly deny Stitch the opportunity to fight, just when he had reached the point where he might begin making a little money for all his trouble. Stitch got closer to a title fight, and some real money, then he developed a cataract, and had to convince officials he could do battle.

Manager Bruner explained to the press that he and Stitch were aware of the cataract. “We’ve known about the condition for possibly a year,” he said. “Rudell has been going to a doctor periodically and we thought it was clearing up. We’ve fought in New Orleans, New York, and Miami and no one paid much attention to it.”

“We’ve been told there’s a chance of him losing sight in it if we fight or if we don’t fight,” Bruner continued. “But we think it is clearing up by treatments. Stitch is using drops in it. No one has told him he can’t fight again.”

Louisville ophthalmologist, Dr. M. C.  Baker, who had been treating Stitch, didn’t see why the cataract should affect his career. “I can’t imagine why they did such a thing,” Dr. Baker said of the Illinois regulators. He had examined Stitch’s eyes several times in 1959, including December 1st appointment. Stitch had fought twice since that visit.

“The boy has 20-30 vision in his left eye,” the doctor argued. “That is only one line below normal on the chart. He has 20-15 in the right eye. That is above normal. And he has wonderful side vision, which is very important in boxing.””

Chicago fight physicians were known then for their rigid examinations. Joe Martin, a police officer and local Louisville trainer said, “We always found them very strict with the Golden Gloves boys.”

They were too strict for Dr. Baker: “Many persons with worse vision pass examinations for automobile driving every day.”

Manager Bruner didn’t have a medical opinion, but was willing to discuss the pragmatics of the suspension: “All the boy wants is to cash in on the high position he has earned for himself. Just five or six more fights to get himself over the financial hump. Then, if his eye begins to bother him he can quit with the comfortable feeling he has provided something for his wife and kids.”

“I’m ready to help the boy any way I can,” M.R. ‘Bob' Evans, the state boxing commissioner, said. He qualified that position, however, with the thought that if future medical tests revealed “that further boxing would jeopardize the sight, I would be the first to tell the boy to hang up his duds.”

Fortunately, that would not be necessary. An examination at the Mayo Clinic showed Rudell Stitch to have 20-25 vision, which resolved the problem. He was free to fight.

The top welters – Aikens, Rodriguez, Ortega, Stitch, Garnett Hart – had all been chasing Jordan for a chance of taking his crown, but with Paret becoming the new champion, Stitch knew that a victory over Rodriguez would greatly strengthen his case for getting a shot before the others.

When Stitch went fishing the day prior to signing for the Rodriguez fight, he was accompanied by his friend, Charles Oliver, Bud Bruner, and Bruner’s son. Stitch liked to throw out a line and see what would grab on to the hook.

Oliver was apprehensive about walking out on the spillway and held Stitch’s hand. When Oliver slipped and fell into the river, he took Rudell Stitch with him.

Bruner said it was some time before Stitch could discard his boots and waders so he wouldn’t be weighed down in the water. He was making his way to the river bank when he heard Oliver’s calls for him and turned back. The 5’8” Stitch swam into the rapids to help his 6 foot, 180 pound friend.

The current carried them to behind a pier where the swirling water of an eddy pulled both Stitch and Oliver underneath. Neither would be seen again until the Coast Guard discovered their bodies later that afternoon.

Witnesses said Stitch would have been safe on shore if he hadn’t turned back for Oliver, which was the basis for Stitch receiving his second Carnegie Hero Medal, this time posthumously.

Rudell Stitch was an admired man in Louisville, well-known and well-liked. Twelve hundred people would attend his funeral, and thousands more the viewing. When it became apparent that Stitch’s church did not have the capacity to accommodate the number of people who wanted to pay their respect, the funeral was moved to a “white church,” that had no “Negro members.” The Reverend C.E. Allen said the funeral “for a Negro”at Central Presbyterian was the first in his memory.

The Stitch family had moved to a new home in the fall of 1959, and Stitch had taken out an insurance policy on the mortgage, so the house was paid for in full when he died. That, a little life insurance, and Social Security benefits helped to keep the family together. Stitch’s mother-in-law, Evie Rice, moved from Detroit to help her daughter Rosa Mae raise the children.

Stitch’s son Donald, who would grow up to receive a football scholarship from Jackson State, was nine years old when his father died, and would be four years older than that when he lost his mother.

The shooting occurred in the early morning hours of January 20, 1964. Mrs. Stitch’s mother was visiting her sister for the night, and a man Mrs. Stitch had been dating until a New Year’s Eve argument ended the relationship was at the house.

Janet Lynn thought she heard her mother scream during the night. She went to the bathroom and called through the door, but went back to bed upon receiving no answer. Mrs. Stitch’s body was found the next morning lodged against the bathroom door, dead of a single gunshot to the upper chest. She was 31 years old. A wounded man, Philander Bryant, 44, was on the floor next to her, with a pistol lying between them. Bryant would die a couple days later at General Hospital in what police would determine was a murder-suicide.

As son Donald would explain years later, his grandmother saved the family after his mother’s passing. “She kept all of us together at the house there,” he said. “Instead of us getting separated, she took us to church, worked day work, got Social Security, and we never wanted for anything. The lights were never turned out.”

Ms. Rice, who was 51 when she took custody of the six children, was absolute about not wanting to see the family separated. “I couldn’t run away…,” she said. “Their mother wanted them all to go college and I hope to live to see them all go.”

“Rosa took the children to church and Sunday school (Grace Presbyterian) every Sunday. And I have to do the same,” Ms. Rice said, well aware of the challenge that lie before her. The first thing Ms. Rice knew she needed to do was “take driving lessons.”