Hey, have you noticed? There's as much buzz for the Heather Hardy v Shelly Vincent rematch as there is for any fight on the Oct. 27 MSG Theater fight card…Am I wrong? Here is a release which went out following Hardy's NYC gym workout on Wednesday. Also, you can buy tickets to see Heather Hardy-Shelly Vincent 2 RIGHT HERE.
HEATHER HARDY HEATED UP MENDEZ BOXING GYM
AT AN OPEN MEDIA WORKOUT AS SHE PREPARES FOR HER WORLD TITLE SHOT AGAINST RIVAL SHELLY VINCENT
SATURDAY, OCTOBER 27
HULU THEATER AT MADISON SQUARE GARDEN
NEW YORK, NY
TICKETS ON SALE NOW! 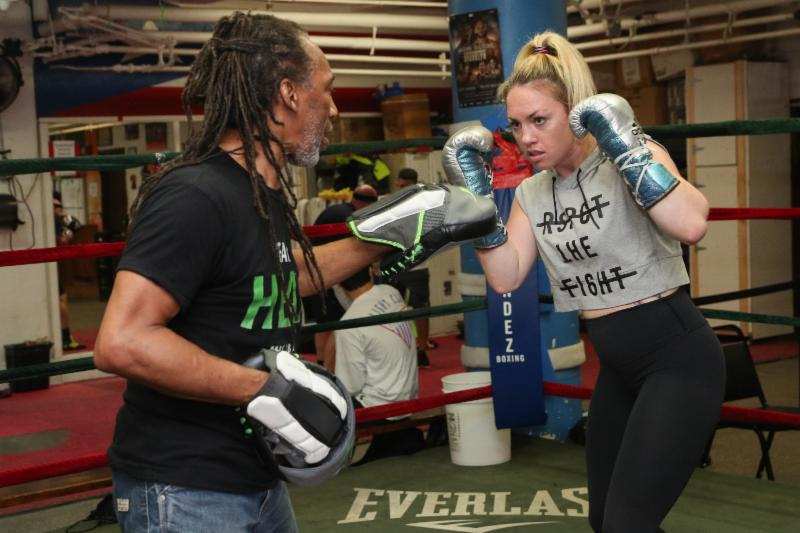 (Photo Credit: Ed Mulholland/Matchroom Boxing)
Photos/Ed Mulholland, Matchroom Boxing
New York, NY (October 11, 2018) Featherweight contender Heather “The Heat” Hardy (21-0, 4 KOs), of Brooklyn, NY, held a media workout for the New York City press on Wednesday afternoon leading up to her highly anticipated 10-round rematch against rival Shelly “Shelito's Way” Vincent (23-1, 1 KO), of Providence, RI, for the vacant WBO Women's Featherweight World Title on Saturday, October 27.
Hardy vs. Vincent will open a sensational tripleheader televised live on HBO World Championship Boxing beginning at 10:00 p.m. ET/PT from the Hulu Theater at Madison Square Garden.
Below are Heather Hardy quotes from the media workout:
“Training for this fight has gone very well. I have never had so much time to prepare for a bout so it's been a really fun, challenging camp.”
“There's always a lot of hype going into a rematch, particularly when the first fight was so action-packed. I've transformed as a fighter in the past two years, grown out of a lot of bad habits and gotten much stronger after my crossover to mixed martial arts.”
“I've spent my entire career advocating for more opportunities for women in the sport, so to be given the opportunity to fight for a WBO world title at Madison Square Garden and on HBO is really a dream come true. It speaks volumes to how hard work, dedication and persistence pays off.”
“There's been a significant growth in women's boxing since 2016 when Claressa won her second gold medal at the Olympics. Outside of Lou DiBella who has always been an advocate for women in boxing, we've seen more promoters start to sign and showcase women and give them airtime on multiple platforms.”
“It's hard to believe that it was 2012 before women were even allowed to box in the Olympics, so while its incredible to see the growth in the sport since then, we have to acknowledge that there's still a long way to go. Women's boxing is still in its infancy. Until the weight classes for women are expanded in the Olympics, with only three right now compared to 12 for men, the pay gap is closed. Until the airtime is distributed equally based on talent and not gender, we have to keep fighting. No freedom till we're equal.”
—————————————————————
In a rematch of their epic 2016 “Fight of the Year”, Brooklyn's Heather “The Heat” Hardy (21-0, 4 KOs) and Shelly “Shelito's Way” Vincent (23-1, 1 KO) will clash once again on Saturday, October 27, at the Hulu Theater from Madison Square Garden. The scheduled 10-round bout, for the vacant WBO Women's Featherweight World title, will open a sensational tripleheader televised live on HBO World Championship Boxing beginning at 10:00 p.m. ET/PT.
Previously announced on the telecast, Daniel Jacobs (34-2, 29 KOs) and Sergiy Derevyanchenko (12-0, 10 KOs) will battle for the vacant IBF World Middleweight Title and Alberto Machado (20-0, 16 KOs) will defend his WBA Super Featherweight Title against Yuandale Evans (20-1, 14 KOs).
Tickets are on sale NOW from TicketMaster.com priced from $46, $66, $106, $206 and $356 (ringside). The Jacobs vs. Derevyanchenko event is promoted by Matchroom Boxing and DiBella Entertainment in association with Fight Promotions Inc., Golden Boy Promotions and Miguel Cotto Promotions
“Road to Jacobs/Derevyanchenko,” an invigorating special examining the highly anticipated 160-pound title showdown between Daniel Jacobs and Sergiy Derevyanchenko, debuts Saturday, Oct. 13 at 10:25 p.m. ET/PT on HBO.
Related Topics:BoxingBoxing NewsdibellahboHeather HardymsgShelly Vincent
Up Next