During Teddy B. Blackburn’s more than four decades in boxing, he compiled a long list of impressive accomplishments. A native of Ann Arbor, Michigan, he trained as an amateur at the Ann Arbor Boxing Club at the University of Michigan, where his father was a professor. The highlight of that time period was the wonderful relationship he developed with the late, great Emanuel Steward, who developed championship caliber amateurs from the ground up at the nearby Kronk Gym in Detroit.

Steward realized that Teddy’s  photographic skills would take him further than his boxing talent so he avuncularly warned him not to enter the Kronk without a camera around his neck. The low point of Teddy’s boxing career was getting stopped by the hard-punching Booker T. Word, who as a pro would win the USBA light heavyweight title.

Teddy, now 62, fared much better behind the camera than he did as a fighter. After moving to New York from New Orleans and Atlantic City in the 1980s, he likes to say he “turned pro” while photographing one of Lou Savarese’s early bouts. They developed a friendship and Blackburn accompanied Savarese to Scotland for his unsuccessful challenge of Mike Tyson in 2000.

Teddy was extremely busy throughout the 1990s and into the 2000s. For five years he was part of Don King’s traveling circus. Besides being a staff photographer for Don King Productions, his other duties included babysitting champions, even accompanying one to a “therapy session” in the days before a big fight.

Teddy’s photos have appeared on the covers of major newspapers, including the New York Post and the New York Daily News. In 2005, he published a book of photographs called “In the Other Corner: A Tribute to Gerald McClellan.” 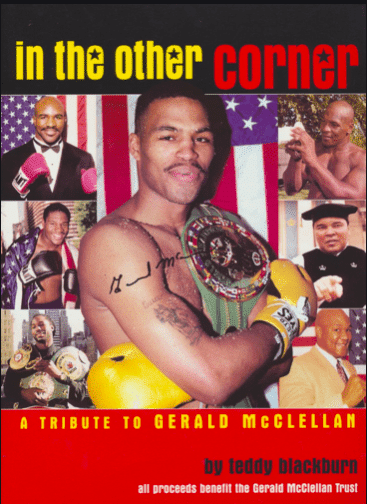 He donated all of the proceeds to the family of McClellan, the former middleweight champion who was permanently disabled in a 1995 fight with Nigel Benn. For that altruistic effort, Blackburn was honored twice by the Boxing Writers Association of America, receiving the Marvin Kohn Good Guy Award and the James J. Walker Memorial Award for Meritorious Service to Boxing. There is little that Teddy has not seen or done in boxing. More than anything else, he is proud of the fact that people trust him.

He knows where many bodies are buried but keeps the information to himself.

One thing that thrills Teddy as much as boxing once did is golf. He hits the greens whenever he can, and his favorite playing partner was George Kimball, the cantankerous longtime scribe who passed away in 2011 and will be inducted into the International Boxing Hall of Fame in June. He and Kimball did nearly 90 rounds in five years.

“George loved the 5:21 a.m. tee time,” recalled Teddy. “The night before he’d call me over and over, telling me to be on time. He was always on time – waiting impatiently – and smoking.”

Blackburn loved the curmudgeonly Kimball in much the way he revered Steward. They were not only great friends, but unique mentors who helped him grow in immeasurable ways.

Like Steward, Kimball was a boxing lifer who covered 400 world title fights for publications that included The Boston Herald, The Irish Times, ESPN, and numerous web sites. One of the eight books he authored was the acclaimed “Four Kings: Leonard, Hagler, Hearns and Duran and the Last Great Era in Boxing.” This writer has a humorous memory of time spent with Blackburn and Kimball. We were at a private screening of a foreign feature film about a former champion. Kimball, an inveterate chain smoker, was sitting directly behind Teddy and I in the crowded theater. You could tell he was antsy and wanted to go for a smoke. As soon as the credits began to role, he tapped us on our shoulders and said in his inimitable growl, “Well, we can all say we just saw the worst boxing movie ever made. We will never get these two hours back.” With that he exited stage right to go outside and light up.

One of Teddy’s favorite memories is fraught with both sadness and joy. In what Teddy describes as their “final round” together, they were playing golf in the Bronx. As they finished up, Kimball put out his smoke on the No. 18 green and made an announcement that hit Teddy with the power of the left hook that Booker Word had exploded on his jaw decades earlier.

“That’s it, Teddy,” he announced with his usual rasp. “A port goes into my arm later today. The chemo begins.”

Teddy was in shock as he and G.K, as he called Kimball, swapped money and skins, bumped knuckles, and said their goodbyes. Teddy got into his car and fought hard to hold back the tears. He was stopped by the NYPD for a seatbelt violation and the cop, thinking he might have been drinking, asked why his eyes were red. Teddy, who has been sober for many years, explained what had just happened. The unsympathetic cop still issued him an $80 ticket. “You go through life and meet a lot of people, but few that you consider a really good friend,” he said. “G.K could drive you crazy, but he was one of a kind.

“I’m very happy G.K. has been inducted into the Hall of Fame,” Teddy continued. “He was a great writer who lived life on his own terms. He loved boxing as much as he loved life and is very deserving of this honor.”

Related Topics:international boxing hall of fame
Up Next