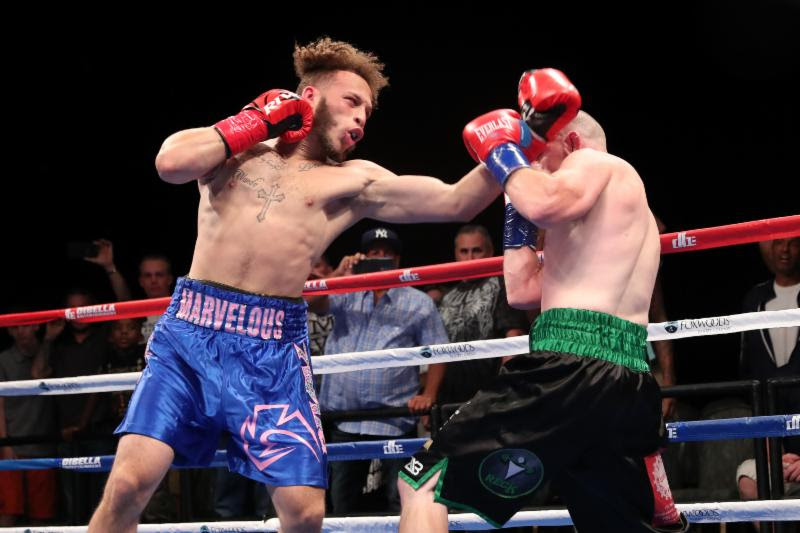 (Photo Credit: Ed Diller/DiBella Entertainment)
In the main event, 20-year-old super lightweight prospect “Marvelous” Mykquan Williams, 140, of East Hartford, CT, went the eight-round distance for the first time, impressively outpointing Matt “The Mantis” Doherty, 138, of Salem, MA, to earn a unanimous decision. Following three consecutive first-round knockout wins, Williams proved that he had the endurance to remain in control for the full 24 minutes of the contest. However, Williams almost had his fourth straight first-round victory when he dropped Doherty twice in the opening stanza with left hooks. The cagey Doherty showed heart in surviving the attack and fighting back gamely, searching for openings to counter for the remainder of the bout. Williams demonstrated deft footwork, dominating the action by landing combinations in close then sidestepping out of harm's way. Scorecards read 80-70 twice, and 78-74, all in favor of Williams. Doherty's record fell to 8-5-1 (4 KOs).
Now 12-0 (7 KOs), the fast-rising Williams captured the WBC USNBC Silver super lightweight title in May. Promoted by DiBella Entertainment and managed by Jackie Kallen, Williams is trained out of Manchester Ring of Champions Society boxing gym by local legend and community leader Paul Cichon, whom he's known since he was a child and looks upon as a surrogate father. Williams was a decorated amateur with a 45-13 record, highlighted by three gold-medal performances at the Ringside World Championships, in addition to winning the PAL Tournament and Silver Gloves Championships. 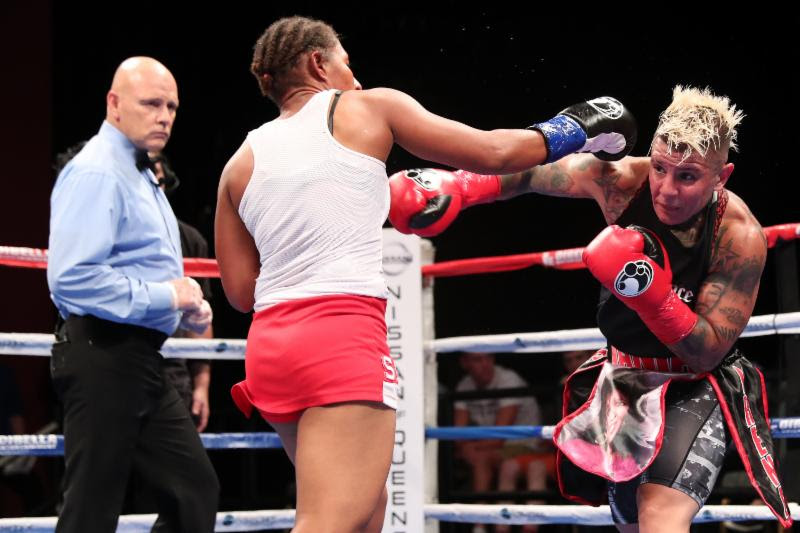 (Photo Credit: Ed Diller/DiBella Entertainment)
Making her 10th appearance at Foxwoods Resort Casino, Shelly “Shelito's Way” Vincent, 126, of Providence, RI, met Tolu, Colombia's Calista Silgado, 124, in a rematch of their encounter last October. Vincent immediately began bobbing and weaving her way inside, planting jabs to the body and left hooks upstairs. Silgado did her best to keep Vincent at bay with counters. The Colombian also used roughhouse tactics, including elbows, attempting to dissuade Vincent from staying in close. However, that only angered Vincent and motivated her to stay aggressive, throwing straight rights to the chin and quick combinations to the body. Unbothered by her opponent's power, Vincent didn't mind getting hit as she closed the distance each round, gifting Silgado some flashy connects, which the judges observed. The final two rounds saw exciting exchanges as Vincent maintained a consistent body attack and Silgado picked her shots well as the New Englander pressed forward. The judges tallied 78-74 twice, and 76-76, awarding Vincent, 23-1 (1 KO), a majority decision victory. Silgado slides to 16-10-3 (11 KOs). Vincent has now won five straight since her only defeat in August 2016 via majority decision in a nationally televised battle to Heather Hardy in what The Ring Magazine hailed as the “Female Fight of the Year.” She was honored by the Connecticut Boxing Hall of Fame as their “Fighter of the Year” in 2016, becoming the first female recipient of the award. A very intriguing matchup, one that will make boxing fans very happy, could be in Vincent's immediate future. 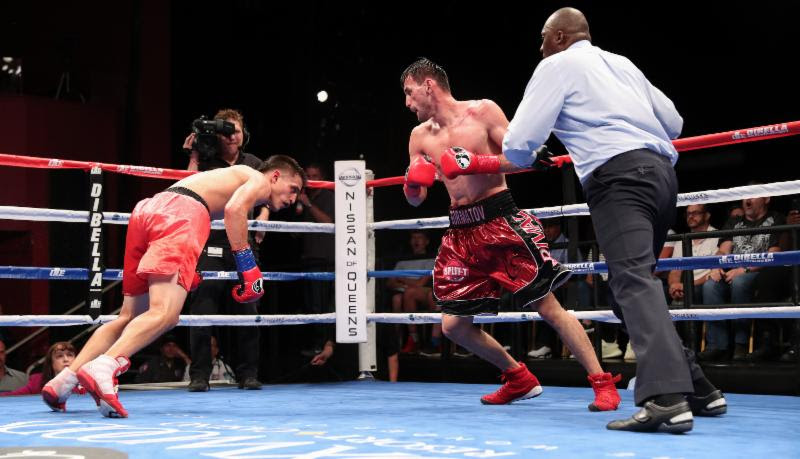 (Photo Credit: Ed Diller/DiBella Entertainment)
What was a very entertaining middleweight contest ended abruptly when southpaw Hurshidbek Normatov, 155, of Brooklyn, NY, handed Alexis Gaytan, 155, of Mission, TX, his first loss by way of devastating knockout. Looking a bit overzealous in focusing on his powershots, Normatov was met with resistance from a determined Gaytan, who countered well. As often happens when a southpaw tangles with an orthodox fighter, a clash of heads resulted in a cut above Gaytan's right eyelid in the second, though it did not interfere with the exciting action. Spurred on by the blood gushing from Gaytan's cut, Normatov stunned his adversary with a straight left then unleashed a barrage of power punches to end round two. Keeping the pressure on, a left hook from Normatov knocked out Gaytan's mouthpiece in the third. Undeterred, Gaytan continued to search for countering opportunities. Gaytan was credited with a knockdown when Normatov, evading shots, bent down at the waist and touched his glove on the canvas in round four. Perhaps now with a sense of urgency, Normatov upped his offensive output, intent on inflicting damage. As Gaytan missed a punch in the sixth, Normatov countered with a thudding right hook that caught his foe clean on the chin and knocked him out cold before he hit the canvas in a heap. No count was needed and the bout ended 41 seconds into round six, increasing Normatov's record to 7-0 (3 KOs). No longer undefeated, Gaytan ended the night with a 4-1 (2 KOs) ledger. A native of Uzbekistan, the 26-year-old Normatov is promoted by DiBella Entertainment and managed by David McWater's Split-T Management. He was an experienced amateur, having competed in 324 bouts and winning the 2014 European National championship.
Quickly making a name for himself as one of the best prospects out of the New England area, Adrian Sosa, 141, of Lawrence, MA, earned the most impressive victory of his young career, battering Cleveland's Darnell Pettis, 137, with blistering power shots throughout the short bout. Pettis was game, but was often caught in exchanges. Near the end of the first, Sosa countered Pettis with a left hook-right uppercut combination that caused Pettis to dip his knees and lose balance, though remaining upright. More cracking straight rights hit their target in round two, wobbling Pettis multiple times. As Pettis leaned forward, he was met with a left hook that staggered him again, resulting in a TKO stoppage 84 seconds into the second stanza. A 2014 New England Golden Gloves champion, Sosa is now 8-0 (6 KOs) as a pro, while Pettis dropped to 3-10. In May, Sosa earned a decision victory against local Massachusetts rival and previously unbeaten Khiry Todd.
Oscar Bonilla, 138, of Bridgeport, CT, needed less than two rounds to secure the first knockout victory on his resume against Philadelphia's Seifullah Jihad Wise. An aggressive Bonilla burst out of his corner at the outset, trapping Wise, 140, against the ropes and banging the body. The local fighter continued to apply pressure in round two, staying on top of Wise, who was too tentative in throwing back meaningful leather. With Wise absorbing another sustained attack against the ropes, the referee opted to halt the contest at the 1:20 mark of round two. Now 5-3-2 (1 KO) in the paid ranks, Bonilla was a New England Golden Gloves champion, while accumulating a 67-6 record as an amateur. Wise suffered his fifth loss in eight bouts.
Light heavyweight contender Lennox “2 Sharpe” Allen, 171, of Brooklyn, NY, shook off the rust from a three-year layoff to stop Willis Lockett, 173, of Takoma, MD, inside three frames. The southpaw Allen began the contest prodding with his jab. A right hook upstairs found the mark and dropped Lockett in the first. The New Yorker then targeted the midsection to break down his foe. A visibly weary Lockett ate a left hook to the body in round three and hit the floor. Discerning that Lockett was unable to continue, the referee immediately waved off the contest without a count, ending matters at the round's 3:00 mark. Now 21-0-1 (14 KOs), Allen is determined to work his way back into title contention. He is a former WBC CABOFE, New York State and Guyanese champion. Lockett's record dipped to 16-24-6 (5 KOs).
Related Topics:Boxinglou dibella
Up Next