Regis “Rougarou” Prograis (16-0, 13 KOs) scored consecutive victories over unbeaten prospects in 2015 on ShoBox: The New Generation. This Friday, the southpaw super lightweight puts his unblemished record on the line against Mexico’s Aaron Herrera (29-4-1, 18 KOs) in the 10-round main event of a ShoBox quadrupleheader, live on SHOWTIME (10:30 p.m. ET/PT) from Buffalo Run Casino in Miami, Okla. 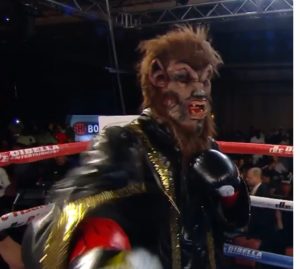 Check out THIS highlight video of Prograis, a New Orleans native who relocated to Houston after Hurricane Katrina in 2005. Prograis wears a werewolf mask during his ring walk as homage to his “Rougarou” nickname. According to New Orleans lore, “Rougarou” is a legendary half-man, half-beast werewolf creature. It’s a deviation of Loup Garound, which means “wolfman” in French.

“Parents use the Rougarou to scare children and keep them in line,” Prograis said. “My father first started calling me that because in the gym everyone would say, ‘Your son is a beast’. He would say, ‘My son is from New Orleans, so he is a Rougarou.’

“It represents my fighting style, my work ethic, and my Louisiana heritage. Basically it means a swamp beast, with the mind and intelligence of a man. In the ring I am ferocious, but I also use intelligence to win.”

Could the Cuban Cause Crisis For Ward?