Who Won the Weekend: It Ain’t Canelo, Fellow, This Alvarez Is Eleider On this weekend, Alvarez grabbed the bulk of the buzz and glory, and sorry Mexico, it ain’t your guy.

Colombia and Montreal can claim the fame that erupted in Atlantic City Saturday night, when Eleider Alvarez scored one of the more meaningful upsets of the year, when his potent right hands nailed Sergey Kovalev, and indeed, maybe put some nails in the Russian’s career coffin.

So, we asked Team NYF to weigh in, as we do every Sunday, to tell us Who Won the Weekend. Have at it, crew…

“The winner was Eleider Alvarez, a fellow Canadian I might add,” Tom Penney said. “But perhaps more importantly, the loser was HBO. With Kovalev now finished as a marketable product (Roy Jones said as much on air) and Dmitriy Bivol looking good but ultimately unimpressive, the network is left without a surefire star beyond Canelo Alvarez. I can't help but feel that HBO is soon going to be getting out of the boxing business.”

John Gatling, for you, who won the weekend?

“This has to go to Yvon Michel and his promotional outfit Group Yvon Michel. His fighter, new WBO light heavyweight champion Eleider Alvarez, eventually whispered loudly enough to silence Sergey Kovalev in the face of “The Storm” and froze a shocked Main Events CEO Kathy Duva,” Gatling said. “The business tycoon was able to seize control of the division from his good friend and all but sent it to Canada, given ties to WBC light heavyweight champion Adonis “Superman” Stevenson. Just as Kovalev fell off the imaginary cliff of Max Kellerman, Michel's stock rose a little more than that of Dmitry Bivol or anyone else this weekend.”

“Atlantic City won the weekend! It's been some years since they not only had a main event but a card that featured two major championships on a major network,” said nominator Abe Gonzalez. “The boardwalk absolutely needed something to jump start it again and the boxing fans showed up as the venue was sold out. With the main event producing the theatrics that it did, I would not be surprised if we get another major card down there before the end of the year.”

“I hate to be obvious, but it's Eleider Alvarez by a distance so wide, Keanu Reeves and that magic bus of his couldn't clear it,” David Phillips tells us. “I will say, I do think somewhere Andre Ward is smiling. As a portion of Alvarez's victory goes to him. He was the one who made the Krusher human!” 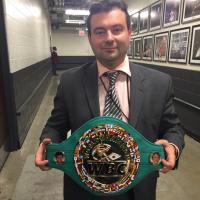 “Eleider “Storm” Alvarez wins the weekend: Hurricane Alvarez stormed into Atlantic City and left a badly damaged Sergey Kovalev in his wake,” Lik shared. “Not only did the underdog Alvarez take Kovalev’s best shot- Alvarez took 25 of them in round 4 and and while he was behind on all three scorecards Alvarez stormed back to knock Kovalev out in round 7. Though Alvarez dropped Kovalev three times it was the first knockdown that Kovalev was unable to recover from. Next time Alavarez comes to your city it’s wise to board up the windows!”

“I suspect most will have the same answer this week – Eleider Alvarez,” Colin Morrison said.  “The man much avoided by Adonis Stevenson got his hands on a world strap by stopping the favoured Sergey Kovalev in Atlantic City. Just like the host city, Alvarez is now firmly back at the forefront of the minds of boxing fans and I am interested to see if Kovalev accepts the contracted rematch immediately.

“Eleider Alvarez for me! He was a 4-1 underdog and trailing on the cards! He leveled Kovalev with a right and put his name near the top of the light heavyweight division!”

The last word goes to Kelsey McCarson, because his missus Rachel fashioned the artful graphics attached to this story. Thanks Rachel, and congrats Eleider; you won the weekend, and, I think, are destined to grab a few more WWTWs. “I think Alvarez won the weekend. The 34-year-old finally got his title shot, and he certainly made the most of the opportunity,” the Texas based writer said. “Alvarez's jab was sharp and steady early, but Kovalev started to open up as the fight progressed. Alvarez landed a hellacious right in round seven anyway and Kovalev didn't know how to recover from it. Amazing performance that instantly changed the landscape at 175 pounds!”

Sergey Kovalev Goes Under the Boardwalk

The Ghost of Andre Ward, He Don’t Fade Away