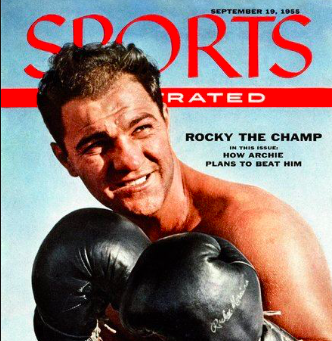 The next time you watch a young Al Pacino in “The Godfather, ” know that his Michael Corleone was inspired by Rocco Francis Marchegiano, more commonly known as the unbeaten heavyweight legend Rocky Marciano (September 1, 1923 – August 31, 1969).

The original “Italian Stallion” from Brockton, MA, Marciano was a Popeye the Sailor of sorts in a pair of Everlast trunks, with the legs and fists to prove it.

Possessing the shortest reach of any heavyweight champion in history (68 in), the 5'10 Rocky was built like a wrestler and seen by the mobsters in control of boxing as a heavier and more stout version of the past in Jack Dempsey. To Cus D'Amato, he was a methodical, swarming iteration of a futuristic “Iron” Mike Tyson.

Enamored with the rugged and crude crowd pleasing style of Marciano (who D'Amato arranged to be handled by close associate and crime boss Al Weill), D'Amato first developed the concept of his famous “Peek-A-Boo” style while analyzing who he deemed “The Rock” and arranged private exhibitions between his then heavyweight champion Joe Louis and Marciano during their shared time serving in the U.S. Military between 1943 and 1944. Legend has it, Louis butchered a young Marciano repeatedly, tales he reportedly shared over laughs and women with close friend Walker Smith Jr, who the world would come to know as some guy named Sugar Ray Robinson.

Rocky was then no more than a rank amateur of scant experience, more suited to be a baseball catcher than a prizefighter. With poor feet and zero nuance, Marciano could bob or weave– but never both at the same time, and what he lacked in natural talent or ability was made up for in seismic grit and uncanny resolve, along with a granite chin and a chilling desire to chop down a foe with a chip in his jock strap that must have weighed 1000 lbs. In terms of sheer toughness, I'm not sure if Larry Holmes could've carried his in the 1940's.

Written off by most wise guys as a super tough bum not worth the hassle, “Marchegiano” (as he was then still known, until a ring announcer in Providence, RI bitterly complained about the pronunciation of his name) fought in relative obscurity, reeling off his first 16 pro fights by stoppage in New England, while unaware that this ascension was being watched and monitored by a guy who knew a thing or two about a thing or two.

Marciano accomplished something very significant while being utterly bludgeoned by Louis in the dark; because he gave the very best of himself to someone as influential as D'Amato– without knowing he was influential at all, it resulted in both knowing just how good he wasn't, with the clear understanding that he really didn't give a fuck. Cus could see that Marciano not only had no fear of any fighter, but he didn't fear the mob either, and was completely unwilling to abandon his pride or decency. “Rock” was unmovable; coming to ride without a seat belt full throttle do or die, as a brash Carmine Vingo found out the hard way, nearly killed by Marciano's predatory nature in December 1949.

But in 1950, realizing a new era was needed for a post WWII White America, the underworld was nearly met with disaster when in March of that year a 23 year-old Roland La Starza nearly ended what would become an iconic 49-0 record. After this, the underworld was careful to keep him clear of boxers, particularly young black ones, as he unknowingly laid the template for the quintessential “protected fighter”, feasting on well done black greats.

A 28 year-old Marciano was finally able to atone for the humiliation of Louis, sledgehammering an ancient 37 year-old “Brown Bomber” via 8th round KO in October 1951.

His most famous bout occurred in September 1952, when he unleashed the “Suzie Q” on Jersey Joe Walcott in the 13th round to win the heavyweight championship. Few closed distance better than Marciano in the history of the sport; as the compact, short anvil of a right hand landed on Jersey Joe stands today as one of the greatest one punch knockouts of all-time.

Still, critics will point out that Walcott was 38 years old, and the subsequent rematch (which Marciano won via 1st round KO) was widely rumored to have been fixed. Ezzard Charles was an old, small heavyweight who'd left his best days in the light heavyweight division by the time he faced Marciano; and Archie Moore insisted in private circles, that he was more concerned about Christmas in August to buy gifts for his daughters when they fought, incidentally, Marciano's last as a professional.

His career was not especially long, spanning all of eight years, with his title reign (which included just six defenses) lasting from late 1952 to late 1955. For perspective, current WBC heavyweight champion Deontay Wilder has an active title reign nearly a year longer.

If you're into trivia, the narrative in Rocky III revolving around Sly Stallone's Rocky Balboa and fixed fights arranged by his beloved Mick (played by the legendary Burgess Meredith), was directly tied to a bitter epiphany as revealed to a demanding Marciano by Weill.

For that reason– and that reason alone, Marciano was nearly coerced out of retirement at age 35 to challenge new heavyweight champion Ingemar Johannson, until he realized he was being set up by the mob to become fodder for a young and controversial Cassius Clay. Marciano despised the way of the man who would become Muhammad Ali, and saw through D'Amato's end game to use him to advance another era, as he'd done with Joe Louis.

So distraught over Rocky's flatulence was D'Amato, that he arrogantly attempted to train a complete novice in surrogate son Jim Jacobs (who would go on to co-manage Mike Tyson along with Bill Cayton) for real championship heights over the aforementioned Moore before scrapping the notion.

The saying is: “If you can be bought, then you can be sold”, and Marciano was no sellout, as he would come to believe Joe Frazier was.

More stoic than poetic in speech, with a regal carpenter's accent to augment a blue collar elegance, the memory of the Marciano fighting style made you believe he could fly until he died in a tragic plane crash near Newton, IA in March 1969. By then on good terms with Ali the man, the two went over a game plan for defeating Frazier during the making of their simulation superfight, while D'Amato worked in covert fashion with “Smokin Joe”.

He was a proud Masshole to the end.

Related Topics:MMArocky marciano
Up Next