CASPER, Wyoming (November 10, 2018) – Bombs away was the theme last night (Friday) as combat sports veterans made their bare-knuckle fighting debuts on the exciting “Rise of the Titans” worldwide pay-per-view event, presented by the World Bare Knuckle Fighting Federation (WBKFF), at Casper Events Center in Casper, Wyoming.
Blood was flying, fighters were dropping, and fans and a near capacity crowd was really into the constant brawling throughout an evening entertaining, competitive and memorable fights.
The main event showcased a pair of combat sports icons, Chris “The Crippler” Leben and “The New York Bad Ass” Phil Baroni, in a special light heavyweight attraction. Left-handed Leben, fighting out of San Diego, shook off Baroni's early roughhouse tactics, floored him, and then put his lights out midway through the first round.
“He was clinching and I wanted to stand in the middle of the ring and bang,” Leben remarked. “Down he went from a big left hand. He does have a hard head.” 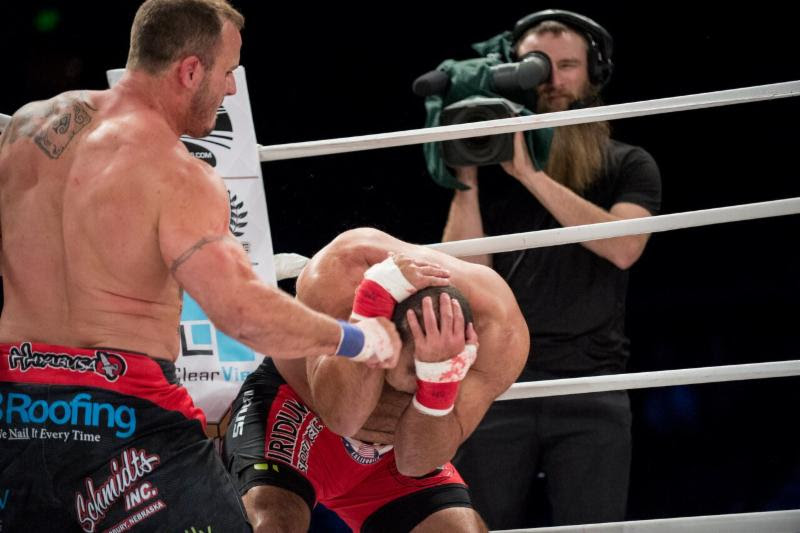 (L) Dakota Cochrane finished off Johny Hendricks
In the co-featured event, former UFC welterweight champion Johny “Biog Rigg” Hendrickscame out of a one-year retirement from fighting to take on dangerous MMA veteran Dakota Cochrane, of Omaha, NE. Hendricks was originally scheduled to fight in the main event against “Irish” Brennan Ward, who withdrew earlier this week. Cochrane was already fighting on the card and he quickly agreed to replace Ward and take on his popular Fort Worth opponent in a middleweight special attraction.
Hendricks suffered a cut under his right eye in round one, then Cochrane suddenly and shockingly ended the fight 21-seconds into the second round with an explosive, straight right that silenced the pro-Hendricks crowd.
“It (bare knuckle fighting) was definitely different,” a jubilant Cochrane said after the fight. “I love my big right hand, I've been practicing it.:
“Honestly, I'm moved” said an elated WBKFF CEO and founder Tom Stankiewicz after the conclusion of his organization's inaugural show. “I was very surprised by the underdog, Munoz, and a new star was born tonight, Dakota Cochrane. Everybody fought their best, they were all warriors. I hope all these fighters stay with us. We are planning our second show for February 9 at a site to be determined.” 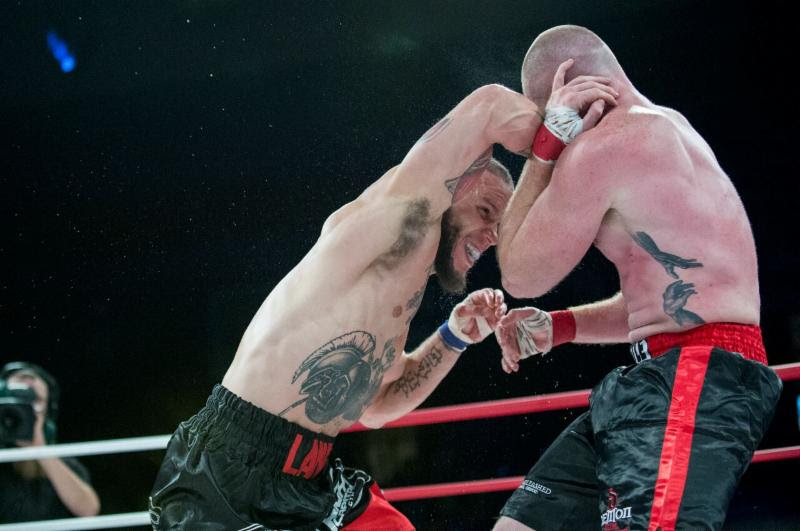 Fight of the Night: Julian Lane (L) and Joey Angelo each won a new Ford Mustang (see picture below)
Always tough Ohioan fighter Julian “Hellboy” Lane and Las Vegas' middleweight Joey Angelo had the ultimate showdown, which broke out into a fire-fight in the third round, at least until Lane connected with a straight right on the chin to drop Angelo. Trailing on the scorecards, Angelo opened the fifth round going for broke, but Lane was the aggressor from start to finish, as well as the more efficient puncher, earning a split decision victory. Lane overcame a broken left hand he suffered in the third round. 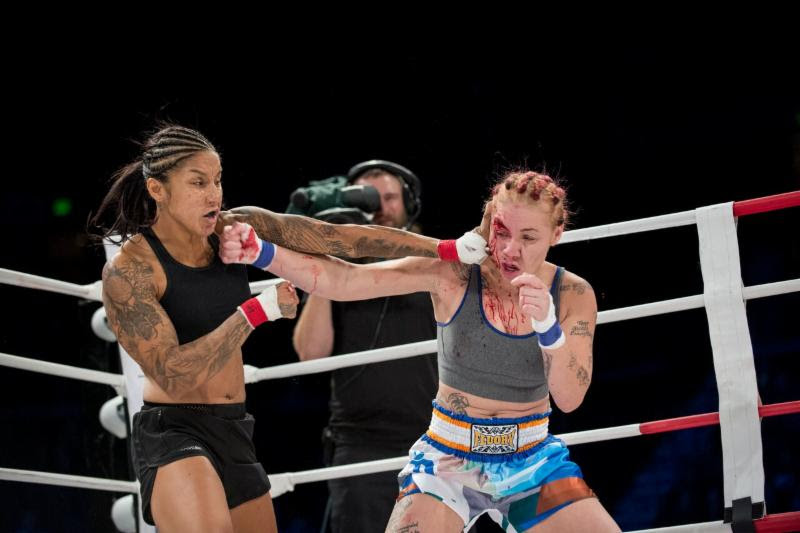 Christina Marks (L) bloodied Jasmine Clark en route to an impressive win
San Diego MMA fighter Christina Marks, 2017 The Ultimate Challenge runner-up, and former world boxing title challenger Jasmine Clark, of Texas, squared off in a female bantamweight match. Marks, who celebrated her 33rdbirthday in style, cut Clark over the right eye midway through the opening round. Marks swarmed her opponent in the second, keeping her distance and landing stinging shots on Clark's damaged eye, until she was no longer able to defend herself and retired.
The $100,000 WBKFF Lightweight Tournament launched last night with two black-and-blue type fights. Former UFC and Strikeforce fighter Robbie “Problems” Peralta, of Escondido, CA, caught Ireland-born Jay “The Mellow Fellow” Cucciniello, now living Spain, in the second round with an overhand right that dropped him. Blood dripping down his face like a badge of courage, the gutsy Irishman finished the third round strong, and the two fighters battled on equal turf in the fourth. Despite Cucciniello's vision obviously hampering him, he kept coming forward in the fifth, but Peralta maintained control, effectively picking his spots, en route to an impressive win by unanimous decision.
South African Leon “The Iron Lion” Mynhardt, now living in Fairfield, CA, was too much for Texan Nick “The Ghost” Gonzalez in the other tournament match, and the fight was eventually halted by the referee in the second round because of excessive punishment.
Former UFC and Bellator fighter Josh “The Dentist” Neer, fighting out of Des Moines, Iowa, had not fought in 2-½ years, when he entered the ring to fight boxer “Mad” Max Alderete, of Albuquerque. Neer needed a round for the rust to wear off, after which he walked down Alderete and unloaded on his head and body, mostly throwing upper cuts, one putting him down near the end of the third round. Alderete was unable to answer the bell for the fourth round.
Brazilian MMA veteran Marcelo “Mello” Alfaya put late replacement Joey Munoz on his back with the first punch he threw, but his Nebraska opponent showed tremendous heart, resulting in the crowd getting behind him. Attrition started to play a role in the third round, as both fighters slowed down, but they battered each other in a wild fourth round. In the fifth and final round, Alfaya was penalized a point for hitting after the break, and Munoz closed the show, pulling off the first upset of the evening by way of a five-round majority decision. Munoz took the fight on one-day notice, lost 17 pounds, and drove three hours to Casper.
Former UFC and Strikeforce fighter Issac Vallie-Flagg and upset minded Cory Simpsonopened the PPV segment of the night fighting at a 175-pound catchweight. After a somewhat strategic first round the pace changed abruptly in the second round as both fighters opened-up. Class soon prevailed as Vallie-Flagg, of Albuquerque, knocked down a game Simpson early and he then finished him off with a barrage of brutal body shots for a second-round knockout.
Hall of Fame ring announcer Jimmy Lennon, Jr. joined WBKFF's all-star announcing team –Bas Rutten, who is also WBKFF president, Kenny Rice and Jessica Penne -for the pay-per-view and Preview airings, distributed by Integrated Sports Media.
Super heavyweight C.J. “Big Cake” Leveque suffered a cut to his right eye in the opening round, courtesy of Houston's Juan Torres, but the 288 ½ pound Californian immediately responded by decking Torres, who spotted his opponent 212-pounds, with a roundhouse right early in the second. Torres bounced right back, though. He drilled Leveque with a vicious shot in tight-quarters, sending him face-first to the canvas for a second-round knockout to conclude the preliminary card.
The first preliminary card fight set the tone right from the opening bell in a 160-pound catchweight fight. Long-haired favorite Jeff Chiffens, fighting out of Delaware, came out firing shots and 15-seconds in the opening round, Chiffens drew blood first, opening-up a cut over Fred Pierce‘s right eye. After the ring doctor examined and cleared Pierce to fight, the action resumed and Chiffen dropped Pierce with a powerhouse right. Pierce beat the count, but referee stopped the fight at the 1:04 mark of round one.
Newly adopted rules including holding and striking, spinning backfists and hammer fists were allowed, and a traditional boxing ring was used for optimum viewing and safety. All men and women's matches were scheduled five (two-minute) rounds.
Related Topics:BoxingBoxing NewsMMAUFC
Up Next