When Wilfredo Mendez first traveled to Las Vegas this summer to train, he did so without much of a plan in place as far as his fight future was concerned.

The whole world underwent a massive shift due to the ongoing coronavirus pandemic and the effects of it are still affecting boxing today, more than six months after shutdowns started.

Most events are being held without fans, fights previously announced went off the deep end and fight weeks are held with the worry that bouts could get canceled due to someone testing positive for COVID-19.

Enter Mendez, the WBO’s world champion at minimum-weight, who has been in Las Vegas training for months, not knowing when he’ll see action in a fight once again. “We’re still waiting for a call that could come at any time, whether it would be to defend my title or just have a non-title fight. We’re just trying to stay active, not lower our guard since things are looking bad for now. Some days, it can get worse with the pandemic, the gyms are closed, so we decided to take our training in Puerto Rico and transfer to Las Vegas. It lets us stay ready for whenever the time comes and we get a call to fight. If we had stayed in Puerto Rico, we wouldn’t have done anything really. I couldn’t fight because I wasn’t doing anything. I came here to Las Vegas for new opportunities and see what’s out there,” Mendez (16-1 with 6 KOs) said. 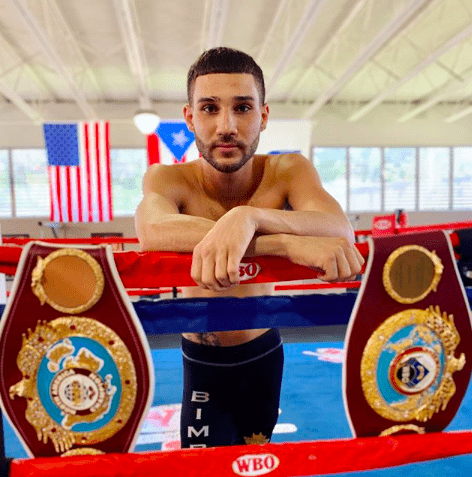 Mendez won his world title back in 2019 when he defeated Victorio Saludar in front of his home country fans in the Puerto Rico capital of San Juan. Proud of that victory, Mendez knew that he had a huge target on his back the moment his hand was raised in victory and that WBO championship belt was strapped around his waist: “I’ve had to mature and I needed to be more disciplined. That helps me a lot with boxing, it forces me to be a lot more dedicated to the sport because I don’t want to let people down. I want to be a world champion for a long time, whether it would be at 105 pounds, 108 pounds, 112 pounds or even unifying titles. It’s a feeling that I can’t quite describe in words. You just have to live it to get that feeling.”

But Mendez isn’t simply fighting for himself. He not only has the weight of an entire nation on his shoulders, but the weight of the legacy of the last Puerto Rican to hold that WBO title: Ivan Calderon. Calderon (pictured below) has long been admired by many pundits in the boxing community for his great defensive skills, boxing acumen and dominance over the 105-pound division as the WBO champion. Between Calderon’s title reigns at minimumweight and light flyweight, there are 17 world title defenses to his resume, a resume that has him in this year’s International Boxing Hall Of Fame ballot. Mendez wants to have a career that can match up with Calderon’s legacy as a great champion, but Calderon challenged Mendez to soar to heights even greater than he ever achieved in his days fighting. “Ivan’s actually gave me a goal to break his title defense record,” he said. “He defended his title 17 times and so he wants me to defend my title 18 times. I like that he challenges me. It gets me motivated to go out and do things and he gives me advice on not just boxing, but also the business side of things. He tells me to fight intelligently, make sure that I don’t get hit, stuff like he tells me and he’s someone I’m happy to call a friend. Hopefully one day, I can beat his challenge and defend the world title 18 times and maybe even go to the Hall of Fame one day. Ivan’s not there yet, but I think he will be in the Hall of Fame, hopefully soon.”

How does one have a greater career at 105 pounds than Calderon? After all, Calderon’s run at that weight alone included 11 title defenses, and Mendez only has two title defenses. However, Calderon’s championship run never saw him unify titles with any of the other titleholders of sanctioning bodies. In Mendez’s eyes, unification is one route to go and he is already targeting the other champions at minimumweight. While he would love to face WBA champion Thammanoon Niyomtrong and IBF champion Pedro Taduran, the one champion Mendez would love to face perhaps the most is WBC champion Chayaphon Moonsri, the Thai boxer who sports a 54-0 record.

Regardless of which champion steps up first, Mendez wants to become the undisputed king at 105 pounds. “I have a lot of things in mind. One of those things is to fight the Thai champion. I got other goals such as unifying titles with Pedro Taduran and the WBA champion. I want to be able to unify championships. There’s not many Puerto Ricans that have done that. There’s only a few like Tito Trinidad. I’d love to fight everyone and become the undisputed champion at 105 pounds. That’s my goal, to beat the champions and unify titles, God willing and then make the jump to 108 pounds,” Mendez said.

Even as a champion, Mendez is still dealing with the new challenges that the pandemic has brought about. Despite this, Mendez wants to remain positive and has a message for everyone back in his home country of Puerto Rico. “The only message I have for them is to take things easy, that good things will come in due time,” Mendez said. “We’re going through this storm, but we just have to keep the faith, not lower our guard and stay safe. That’s the only thing I have to say to them. Good things will come.”

Estrada and Gonzalez Set Up Irresistible 2021 Repeat or Revenge Mission