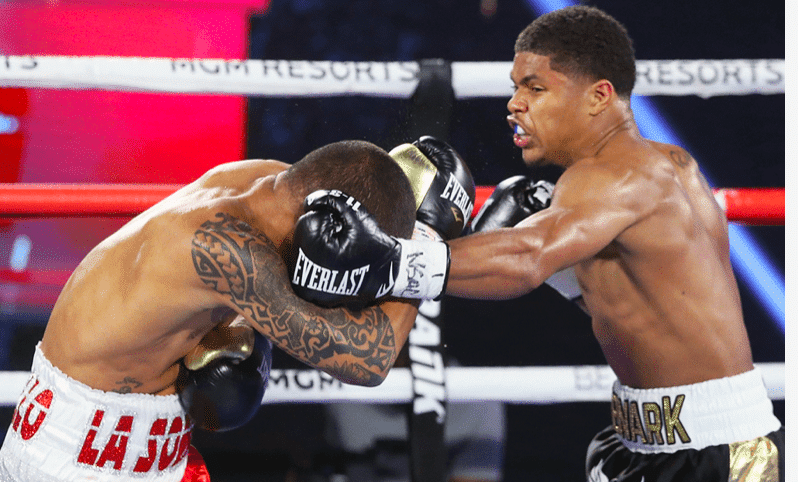 It was by no means a stacked card, filled tip to top with alluring matches, meaningful scraps which you knew would likely resonate far beyond fight night. But the import of the Tuesday night return to action for Top Rank, on a fan free show at a ballroom in the MGM in Vegas, shouldn't be diminished.

Live fights happened, and no, we'll not go overboard with hyperbole, and term it a miracle. But the five face-offs did provide a welcome distraction, some respectable action in spots and could generally be termed a success, if your expectations were not too high going in. Promoter Bob Arum, age 88, walked the walk, and sat near ringside, masked up and pleased to be back on the boxing track.

That the card unfolded, that fact was the “the winner” for the night. Beyond that, Shakur Stevenson did the expected, he got the W over a two steps below in skills Felix Caraballo, and got an extra point for an uptick in aggression. People who watched on ESPN heard Joe Tessitore and Tim Bradley give thumbs up to the Newark, New Jersey repping boxer, who said he liked how he felt at 130 pounds. Stevenson looked like he's nearing growing fully into his “adult” body, and we liked how he told fight fans that he came in to the bout thinking stoppage, seeking the clarity and entertainment value that a KO brings.

Post fight, Arum said, “What a magnificent performance by Shakur Stevenson. He keeps on getting better, and rest assured, he is a future pound-for-pound superstar.”

He continued: “I have thank everyone involved — from our staff to the folks at ESPN and MGM Resorts — for making this event a reality.”

Stevenson afterwards gave some thoughts: “Everything about this fight week was different, from the fight week to the weight cut. After my last fight was canceled, I was happy to showcase my skills for all of the boxing fans.”

Also, “He hit me with a couple shots, more than I’m used to, a couple jabs here and there. He was a tough guy, but I felt great in there after my training camp in Houston.”

And, he told Bernardo Osuna, he surely will mask and glove up, and be marching in protests for his community and the cause.

Yes indeed, missions were accomplished in getting the favored A sides Ws tacked on to their BoxRec. We'll see if that trend continues Thursday, when boxing comes back to that MGM hot spot.

Here is the release sent out by Top Rank. Photos, by the way, were taken by Mikey Williams, for Top Rank:

LAS VEGAS (June 9, 2020) — Boxing is back, and Shakur Stevenson put on a show. The WBO featherweight world champion, who was making his super featherweight debut, knocked out Puerto Rican contender Felix “La Sombra” Caraballo in the sixth round of a scheduled 10-rounder at MGM Grand Conference Center—Grand Ballroom in Las Vegas.

Stevenson showcased his talents in the first major boxing card in the United States since the COVID-19 pandemic began.

“Everything about this fight week was different. After my last fight was canceled, I was happy to showcase my skills for all of the boxing fans,” Stevenson said. “He hit me with a couple shots, more than I’m used to, a couple jabs here and there. He was a tough guy, but I felt great in there after my training camp in Houston.”

Said Top Rank chairman Bob Arum: “What a magnificent performance by Shakur Stevenson. He keeps on getting better, and rest assured, he is a future pound-for-pound superstar.”

— Heavyweight sensation Jared “The Real Big Baby” Anderson (4-0, 4 KOs) wore down Johnnie Langston (8-3, 3 KOs) before a furious barrage ended things at 1:55 of the third round. Anderson was extended past the first round for the first time in his career. Anderson and Stevenson wear grins, and shirts which speak to the heavens.

“He took some good shots. He was a tough opponent. I did what I wanted to. I did some stuff I didn’t want to do. I got caught with a good shot. It didn’t hurt me, but I definitely got caught with it,” Anderson said. “I know a different opponent could hurt me with a shot like that. We’ll go back to the drawing board and see what I did wrong.

“This wasn’t what I expected, but it was a great experience. I’m happy I got the opportunity to showcase my talents on ESPN at such a young age.”

—Guido “The Gladiator” Vianello (7-0, 7 KOs) knocked out Don Haynesworth (16-4-1, 14 KOs) in the opening round, the fourth first-round stoppage of Vianello's young career. A right hand knocked Haynesworth down, and referee Jay Nady stopped the bout.

“It was an interesting experience. I spent three days relaxing in my hotel room, but everything went according to plan,” Vianello said. “I knew the right hand would be there, so I worked to set up that shot. I could not have asked for anything more.”

— Two-time Cuban Olympic gold medalist Robeisy Ramirez (3-1, 3 KOs) notched his third consecutive win, knocking out Yeuri Andujar (5-4, 3 KOs) in the opening round. Referee Tony Weeks called a halt to the contest after Andujar was knocked down for a second time.

“It was an honor to be the first fight back, and I am proud of the performance I gave tonight. My pro debut is long behind me, and I am progressing with every fight. I hope to return shortly,” Ramirez said. “I have a great trainer in Ismael Salas, who continues to add dimensions to my game. He is the man to lead me to a world title.”