The WBA sent out a release informing fans about the press conference held in Manila to hype the forthcoming clash between the fighting Senator, Manny Pacquiao, and Lucas Matthysse, who now holds a welterweight strap.

The fight is set to be a historic one already, with the last time Kuala Lumpur hosting championship boxing being in 1975 when Muhammad Ali defended his WBA World Heavyweight Title against Joe Bugner.

Manny Pacquiao will not only be challenging Matthysse for the WBA title on July 15,  he will also be co-promoting the fight with his company MP Promotions teaming up with Oscar De La Hoya’s Golden Boy Promotions to stage the historic event. 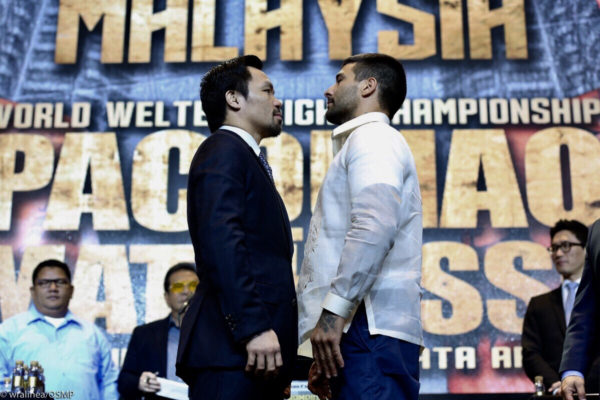 At the press conference Pacquiao said that his time in boxing is far from over and that he can easily fight and promote at this stage in his career.

“My time is not done yet, that’s what I’m trying to prove,” said Pacquiao, “I don’t have a prediction but I will do my best to win convincingly. If I could have the chance to finish it right away, I’ll finish it.”

The champion Lucas Matthysse is honored but not intimidated by the daunting task of fighting Pacquiao, offering up “It’s a great opportunity for to fight Manny Pacquiao. It’s a dream come true because he’s a legendary fighter.” 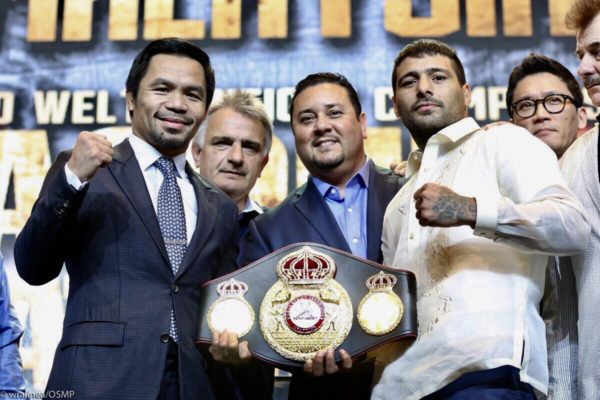 Matthysse also said he would “die for the title” if he had to and further that he would “defend the title to the death.”  The champion does not believe that Pacquiao is the same fighter at 39 years old anymore, “He’s [Pacquiao] still very good, but not at the same level.” ever since the knockout loss Pacquiao suffered at the hands of Juan Manuel Marquez.

The stage is set for a historic fight in Kuala Lumpur, Malaysia, as World Championship boxing returns to the city with another World Boxing Association title fight; the first of it’s kind since the legendary Muhammad Ali graced the country with boxing in 1975

Counting Down To Donaire v Frampton; Sho Will Stream It

Canelo Gets 6 Months Suspension For PED Use