CHICAGO (October 11, 2018) – World Bare Knuckle Fighting Federation (WBKFF) has officially announced the Pay-Per-View fight card for its inaugural event, “Rise of the Titans”, to be headlined by a WBKFF middleweight title fight between Johny “Big Rigg” Hendricks and “Irish” Brennan Ward, as well as Chris “The Crippler” Leben and “The New York Bad Ass” Phil Baroni, Friday, November 9, at Casper Events Center in Casper, Wyoming.
Integrated Sports Media will distribute “Rise of The Titans”, starting at 10 p.m. ET / 7 p.m. PT, in North America on cable, satellite and digital pay-per-view via iN Demand, DIRECTV and DISH in the United States, as well as Rogers, Shaw, Bell TV and SaskTel in Canada, and live-streamed worldwide on the FITE.TV app and website, for a suggested retail price of $29.95.
Tickets go on sale tomorrow (Friday) and will be available to purchase by going online here:
https://ev9.evenue.net/cgibin/ncommerce3/SEGetEventInfo?ticketCode=GS%3ACEC%3ACEC19%3ABKB%3A&linkID=cec&shopperContext=&pc=&caller=&appCode=&groupCode=C&cgc=&RSRC=WEB_PR&RDAT=WBKFF
Ticket prices are between $200.00 – $500.00 for Ringside, $50.00, $30.00, $20.00, $10.00 in the 100 Level Grandstands.
BAS RUTTEN NAMED WBKFF PRESIDENT 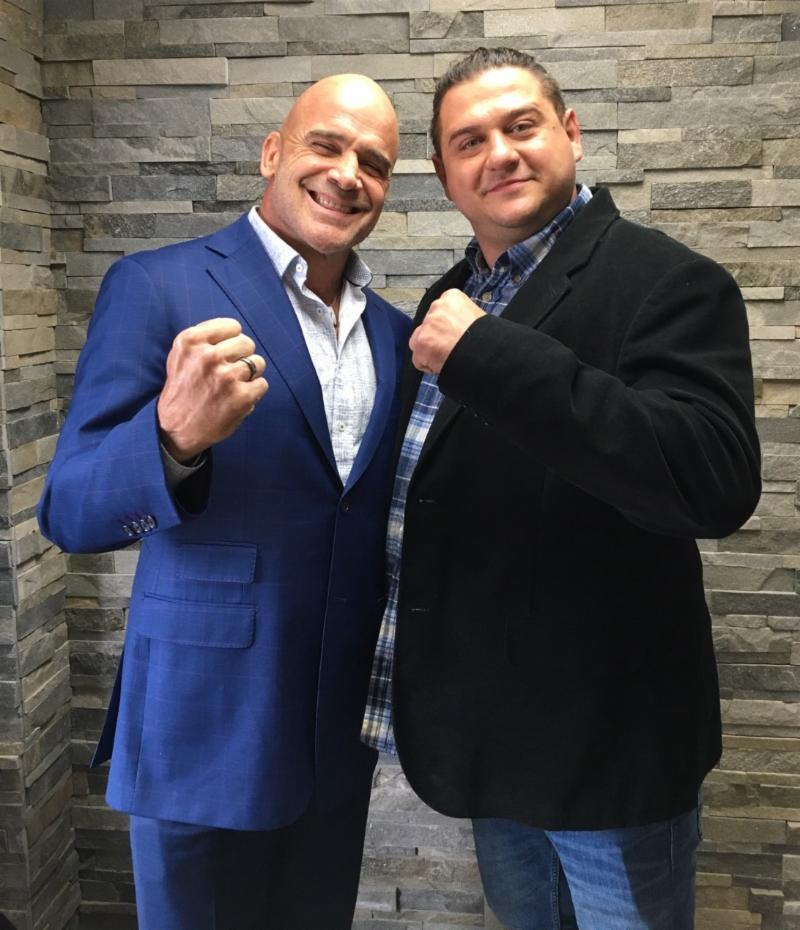 (L-R) – WBKFF President Bas Rutten & WBKFF CEO Tom Stankiewicz
“I am super excited about our first show on November 9th,” newly named WBKFF President Bas Rutten said. “Every single person I've talked to me who has heard about this event let me know what a crazy good card we have. I must admit, they are correct! I would love to talk about each fight on the card, but will do that in interviews coming up, so I will just mention a few right now. Brennan Ward versus Johny Hendricks as main event; two KO artists going at it, can't get any better than that. Chris Leben versus Phil Baroni, both known for their KO's in MMA, but now, bareknuckle? Sign me up! Shawne Merriman versus Mike Bourke; Merriman is a former NFL Linebacker with a crazy vertical leap of 41.5” (he's a heavyweight!) facing off against Mike Bourke, a guy who everybody knows can hit. And let's talk about our lady's fight. Pro boxer Jasmine Clarkson versus Christina Marks, who has 10 MMA wins with 8 finishes. So, expect great competitive fights, and I hope to see you in Casper Wyoming on November 9th. If you can't make it, please watch on PPV! Godspeed and bare-knuckle on!”
Hendricks, fighting out of Fort Worth, Texas, is a former UFC middleweight champion. A past NCAA wrestler out of Oklahoma State University, Hendricks is a powerful striker who was the original WEC middleweight champion. The Oklahoma native captured the coveted UFC title belt in 2014, taking a unanimous decision from Robbie Lawlor at UFC 171 in Dallas.
Ward, who comes from Waterford, Connecticut, is a powerful striker, as well, who was a top contender in Bellator for several years. A collegiate wrestler, as well, he was the Bellator Season 9 middleweight champion
The previously announced Nov. 9 co-featured event is a much-anticipated, entertaining showdown between a pair of legendary MMA fighters, Chris “The Crippler” Leben, of Portland, and “The New York Bad Ass” Phil Baroni, for the WBKFF light heavyweight title.
MMA veteran Mike “The Rhino” Bourke will be the opponent for retired All-Pro linebacker Shawne “Lights Out” Merriman,who recently signed with WBKFF to make his combat sports pro debut on “Rise of The Titans”, in a Special Heavyweight Attraction.
The 34-year-old Merriman played eight seasons in the NFL between 2005 and 2012 for the San Diego Chargers and Buffalo Bills. He was drafted out of the University of Maryland in the first round, 12th overall pick, by the Chargers in the 2005 NFL draft. The six-foot, 275-pound Bourke, hailing from La Habra, California, knocked out living legend Ken Shamrock in the opening round of his most notable career fight.
WBKFF will also launch its $100,000 Lightweight Tournament, showcasing eight fighters in four separate bouts to determine the semifinalists for WBKFF's second event, culminating with the championship final in its third event. A draw to determine the quarterfinal matches will soon be conducted.
Tournament contestants include UFC veterans Issac Vallie Flagg, along with veteran MMA fighters Nick “The Ghost” Gonzalez, Ireland-native Jay “The Mellow Fellow” Cucciniello, Estevan “El Terrible” Payan, Robbie “Problems” Peralta, Mike “The Greek Assassin” Bronzoulis, and South African Leon “The Iron Lion” Mynhardt.
Las Vegas middleweight Joey Angelo squares off with Albuquerque's Julian “Nitrane” Lane, while last year's Ultimate Fighter runner-up Christina Marks, of San Diego, takes on professional boxer Jasmine Clarkson for the WBKFF Women's Flyweight Championship.
The PPV opener will feature Internet MMA sensation Chris “Mighty Mouse” Yarborough meets fellow Virginian, Brandon Dunivan, in a middleweight clash for home state bragging rights,
All fights and fighters are subject to change.
Additional undercard fights will be live-streamed prior to the PPV broadcast with full details to be announced.
Newly adopted rules including holding and striking, spinning backfists and hammer fists will be used in all WBKFF fights, which will be contested in a traditional boxing ring for optimum viewing and safety. All men and women's matches will feature five (two-minute) rounds.
Related Topics:BoxingBoxing NewsMMAUFC
Up Next