Mikaela Mayer Is The Future Of Women’s Boxing In the field of combat sports, women’s boxing fell behind MMA all sudden-like when Ronda Rousey, Gina Carano, and Cris Cyborg started to garner headlines in that sport that often results in the two competitors hugging up against a fence (not that there’s anything wrong with that). This happened largely for three reasons.

First, after a brief bit of notoriety that started largely with Christy Martin, women’s boxing all but fell off the table in terms of interest after Laila Ali walked away. What began as a curiosity never went far beyond that, and when Laila and her celebrity name left the sport, women’s boxing was left to the fringes.

The second reason is related to the first. The lack of quality depth in the sport made it hard to find a lot of meaningful match-ups. You had a sport with few recognizable names and a thin layer of quality combatants.

The last reason was money. MMA invested in hype and promotion. Putting women on the same cards with men. In some cases, the women headlined the night’s festivities. And they became stars. Women’s boxing had no such support. And therefore, it floundered.

Things have changed in the last several years though. Perhaps the biggest contributor to this shift was the inclusion of the sport in the 2012 Olympic games. While still poorly funded, becoming part of the games created not only a structure for the sport, but by developing an amateur network, a chance for women to not only gain entry, but to also hone their craft.

In this new environment, talented and polished women began to emerge. Ireland’s Katie Taylor, took the gold at the 2012 games and has since ascended to the top of her division, currently holding the WBA and IBF belts at lightweight. Germany’s wonderfully named Christina Hammer holds middleweight belts for the WBC and WBO. And here in America, double gold medal winner in 2012 and 2016, Claressa Shields, claims ownership of the WBA and IBF belts at middleweight, as well as the WBC super-middleweight strap.

In terms of skill, publicity, and heat, these three women arguably make up the top trio in the sport. If you follow women’s boxing, it’s reasonable to believe that these are the first three fighters who come to mind.

It’s been said that women’s boxing needs its own Ronda Rousey. Someone who captures the imagination of the casual fight fan while also drawing the attention of the hardcore types who are perhaps unfairly dismissive of the women’s game. For whatever reason – and it may still happen when the inevitable unification bout betwixt Shields and Hammer comes to the ring – it hasn’t quite come to fruition yet. It’s in no way the fault of this fistic trio that they haven’t quite taken off. All three are genuine fighters, have an eye-pleasing style, legit skills, and while I hate to say it (but let’s not pretend it doesn’t matter), they are all good looking.

At this point, there just seems to be an “it” factor missing. It may, on some level, be personality based. Taylor is all business, on the humble side, and not all that interested in hype. Hammer seems willing, but she hasn’t quite connected in that way…yet. Shields has the advantage of being American, holding those two golds, a great backstory from the tough town of Flint, Michigan, and by far the most “in your face” demeanor. However, while she’s certainly looked good since turning pro, there’s a sense that she hasn’t been quite as electric as we might have expected. While she has handily defeated all six of her opponents, she has not plowed through them. She even took a flash knockdown in her last fight against Hannah Gabriels, before dusting herself off and scoring a clear unanimous decision victory. She’s been very good, she just hasn’t been great.

Again, there’s still more than a chance that one of these three women could break through. The thing is, if they don’t hurry up, they just might get surpassed.

American super featherweight Mikaela Mayer’s dispatching of Edina Kiss on the Beltran/Pedraza undercard kast weekend may just have heralded the rise of the future face of women’s boxing. There’s a lot to like on the surface about Mayer. The Top Rank announcers at ringside commented multiple times on the former model’s good looks. 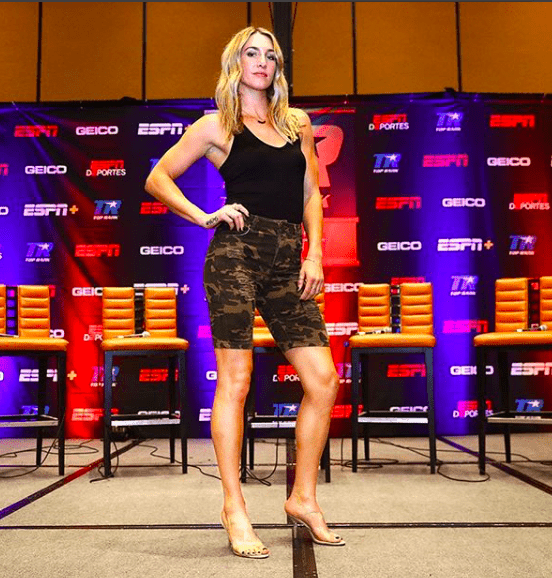 And let’s face it, whether you are a man or a woman, being attractive never hurts. Men’s boxing is full of “pretty boys”, and not one of them suffered from lack of opportunity because of it.

Were that all to Mayer, one might be skeptical about her chances going forward. But it’s not. Not even close. While Edna Kiss may not be a top-level opponent, she was a real one. One who was ruthlessly outclassed by the superior skills of Mayer. At 5 foot 9, Mayer will tower over many fighters in her division. It’s clear that her amateur background (she took the bronze at the 2016 games after a heavily disputed Majority decision loss to Russian Anastasia Belyakova) and her work with top trainer Al Mitchell has added significant polish to her natural physical gifts. She has hand speed and heavy fists, fights tall with good footwork, varies her punches to both head and body, and likes to come forward. To put it simply, she is fun to watch.

She also has a story. Mayer discovered boxing at 17 after walking away from modeling and nearly high school as well (she attended 4 schools in 3 years and grades were an issue). Raised by a single father who supported her efforts, she experienced early amateur success. Her relationship with Mitchell is unique and charming. Originally, Mitchell (who has worked with Mike Tyson, Floyd Mayweather, and Andre Ward among others) did not want to train a female boxer. Impressed by her commitment, Mitchell acquiesced to taking her on as long as she entered college.

The affection between the two appears to be both genuine and special. It’s not hard to imagine their relationship in the Million Dollar Baby vein. Crusty old trainer reluctantly takes on down on her luck female fighter and makes her into something special. Minus the tragic conclusion, of course. All of this is well and good. Better than that even. The only remaining question is does Mayer have the ability to become champion and more significantly, does she have “it”? I feel pretty certain on the first score. The second one is always the dicier proposition. It’s hard to predict what will connect with the masses. Here is what I do know. Aside from her striking appearance and her ability to strike, she has a compelling story, and perhaps most importantly, an ingratiating personality. She’s a tough girl with a runway pedigree. Her Instagram page is frequently hilarious and self-effacing while still giving off that fighter’s edge.

What I’m saying is she’s got a chance. A damn good one.

When in ring and on stage talent marries personality and will, you have something special. Mikaela Mayer may just be that. Mayer moved down to super featherweight in the hopes of building up her record, clearing out the division, and then bouncing back up to her natural lightweight level for a bout with Katie Taylor. If things go to plan, it could be the biggest fight in women’s boxing history. On that night we will find out if I’m right about Mikaela Mayer.

My bet has been placed. I’m calling it now. Mikaela Mayer is the future of women’s boxing.