Mayer had been out of the ring since October 26, as she and Joseph were scheduled to fight June 9. A positive COVID-19 test for Mayer delayed the fight, but she scraped off the ring rust and put forth a dominating performance over the two-time world title challenger.

Following the bout, Mayer received a word of encouragement, and a promise, from Bob Arum (see below; all photos by Mikey Williams for Top Rank). 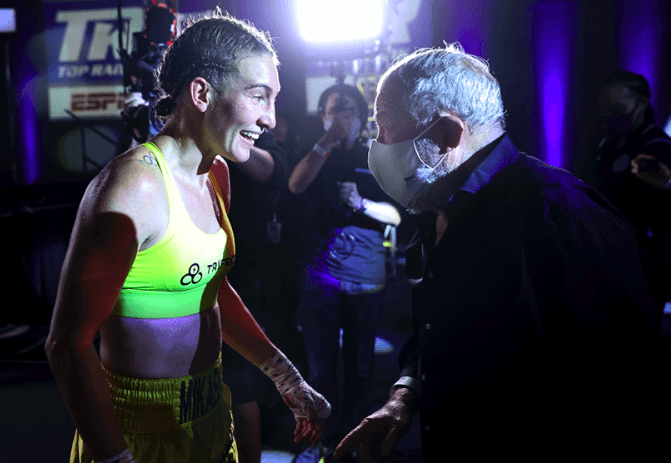 “Bob said, ‘Great fight,’ and that the next one will be for the title,” Mayer said. “We’ve been trying to get a world title fight for a while now. I said, ‘Don’t let Eddie Hearn {outbid} us.'”

— The “Cassius” Clay Collard train rolled through Las Vegas once again, as Collard knocked out Lorawnt-T Nelson in the second round of a scheduled six-round middleweight contest. Collard, standing, notched his fourth win in a row and said he wants to come right back on ESPN.

Collard (8-2-3, 3 KOs) improved to 4-0 on the year, including three victories over previously undefeated fighters. He knocked down Nelson (5-4, 4 KOs) in the opening round and twice more in the second before referee Celestino Ruiz stopped the fight.

“I showed my boxing skills in there tonight. I’m unorthodox, but I get the job done,” Collard said. “As soon as Top Rank wants me back, I’ll be ready. Next month on ESPN, let’s go!”

Theater of the EXPECTED! Scale Fail By Yap Makes Verdejo Fight the Feature