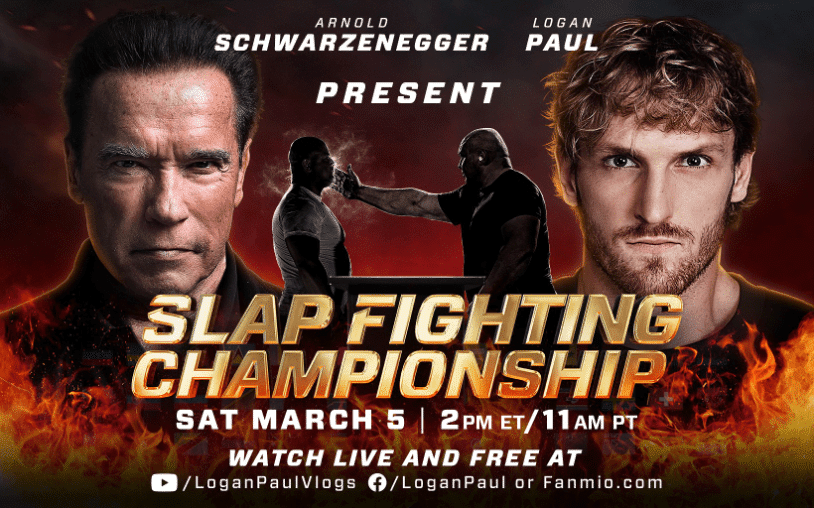 The Paul Brothers continue to find ways to capitalize off of their new found fame.

In addition to the epic featured match-up, the event’s opening fight will see a women’s super-fight between battling beauties is also scheduled, as teen beauty queen and Polish celebrity Adrianna “Flychanelle” Śledź takes on model and dancer Julia Kruzer.

Born in Thal, Austria, by the age of 20, Arnold Schwarzenegger was dominating the sport of competitive bodybuilding by becoming the youngest person ever to win the Mr. Universe title. A visionary by nature, Schwarzenegger emigrated to America in 1968 and went on to win five Mr. Universe titles and seven Mr. Olympia titles before retiring to dedicate himself to acting. In 1984, Schwarzenegger catapulted himself into Hollywood superstardom, playing the title role in the sci-fi thriller, TERMINATOR and went on to star as hero and villain in countless iconic movies. To date, Schwarzenegger’s films have grossed over $4 billion worldwide. This is something different for the actor most known for his role as The Terminator.

In 2003, Schwarzenegger was elected 38th Governor of the State of California in a historic recall election and ushered in an era of innovative leadership and extraordinary public service, including the nation-leading Global Warming Solutions Act of 2006 – a bipartisan agreement to combat global warming by reducing California's greenhouse gas emissions – and overhauling the state's workers' compensation system – cutting costs by more than 35 percent.

Additionally, Schwarzenegger started the now world-famous Arnold Classic with businessman Jim Lorimer in 1989 to showcase his beloved sport of bodybuilding. It was later renamed The Arnold Sports Festival as more and more competitions and exhibitions were added as the event swelled in size to a full weekend, featuring one of the premiere bodybuilding events in the world, as well as the best of strongman, fitness and combat sports with over 20,000 athletes from over 80 nations competing in 60+ events. Schwarzenegger says the addition of the combat sport taking the world by storm is exactly to his vision for his ever-growing festival.

“The Arnold Sports Festival is all about inspiring our fans to chase their dreams and find the sport that starts their fitness journey,” said Schwarzenegger. “I can’t wait to showcase the best slap fighters in the world on the main stage at our event and I’m so excited to introduce this wild sport to our fans with Logan.”

A major personality driving the zeitgeist of the 2020s, Logan Paul is unafraid to take risks and explore new opportunities. He has a clear understanding of how technology, entertainment, and social media work together to speak directly to over 100 million followers across various platforms. Paul has hosted the Impaulsive podcast since November 2018 and has gone on to become a renowned professional boxer. The first Fanmio event was a partnership with Paul and professional boxing world champion Floyd Mayweather to broadcast their successful exhibition battle in 2021. A staunch supporter of the burgeoning sport, Paul says he’s very happy to be involved with bringing the world’s top slap fight tournament to livestream in the United States.

“As someone who always seeks to be at the forefront of any new discovery, it is a thrill to see slap fighting get legitimized in the world of sport,” said Paul. “It is an honor to present these combat athletes to a global audience alongside Arnold Schwarzenegger, Fanmio and PunchDown. Fans will not be disappointed!”

Fanmio is an innovative digital platform that is coming off the heels of a successful inauguration into live sports through the high-profile promotion and PPV of Floyd Mayweather vs. Logan Paul in June 2021. Boasting a community of millions of subscribers and a global reach through its native apps available on Apple App Stores, Google Play Stores and the Amazon App Store, the company has demonstrated its ability to deliver on high-caliber events and plans to continue to bring the best in entertainment throughout 2022. Fanmio Founder and CEO Solomon Engel believes the creation of Slap Fighting Championship will bring new audiences to the growing sport from across nations and demographics.

“Fanmio couldn’t be more excited to come together with Arnold Schwarzenegger, Logan Paul and PunchDown for this event,” said Fanmio Founder and CEO Solomon Engel. “Slap fighting has all the makings of a great entertainment product and we can’t wait to bring it to the world on March 5.”

A powerhouse promotional entity in the sport of slap fighting with multiple major slap fighting events distributed via pay-per-view under its belt, PunchDown was the logical choice to team with for the March 5 event.

“This cooperation with Arnold Schwarzenegger, Logan Paul and Fanmio is the fulfillment of our ambitions to become part of the international world of martial arts,” said Jakub Burdajewicz, Co-owner, Partnership Director of PunchDown. “We are pleased that all of the hard work that we have put into developing the sport of slap fighting is now bearing fruit with Slap Fighting Championship taking place on such a large stage in front of worldwide audience.”

A titan among competitors of slap fighting, Dawid Zalewski has knocked out almost all of his opponents with one slap. The 6′ 1″ and 286-pound Zalewski’s power and seemingly super-human ability to endure competitors’ slaps have placed him atop the mountain of the world’s slap fighting combatants, in the consensus of most experts.

“I will prove to everyone who the real undefeated champion is,” said Zalewski. “I am happy that I have the opportunity to compete in the United States in front of the whole world.”

Raised in Oahu and now living in Springfield, Missouri, the 6’ 3”, 370-pound Da Crazy Hawaiian became an internet sensation after his 21-round slap fight with “Hillbilly Hippie” was posted on YouTube and garnered 1.4 million views. Colorful, charismatic and seemingly unable to give boring interviews, the 32-year-old Viernes is the United States’ most acclaimed professional slap fighter and a North American ambassador for the sport.

“I’ll take on anybody and I’ll put on a show every time,” said Viernes of his upcoming fight against Zalewski. “It don’t matter who the [expletive] it is.”

See why this sport is growing exponentially around the world! The slap fighting excitement begins on March 5 at 2:00 PM ET/11:00 AM PT. Watch live on Fanmio available at Fanmio.com/ppv and via the Fanmio App which is available on Apple App Stores, Google Play Stores and the Amazon App Store and accessible through a number of devices including Apple TV (4th Gen+), Fire TV, iOS and Android TV and mobile. It will also be available live via Logan Paul’s YouTube Channel as well as his Facebook Live Page.