The WBA world super flyweight belt went up for grabs Tuesday evening at MGM's “Bubble” in Las Vegas and more than a few pundits felt like the fight between Andrew Moloney (21-0, from Australia) and Joshua Franco (16-1-2; from San Antonio) on paper looked like the best matched scrap in Top Rank's return to live action.

Indeed, a hell of a battle played out, as good in the ring as it looked on paper.

From the start of the Top Rank attraction it was closely contested and from rounds 2 to 5, it looked like Moloney, who won the interim WBA crown by besting Elton Dharry in November of 2019,  was edging it out.

Moloney, whose twin bro Jason will headline the Thursday night “Bubble” card, was doing good work to the body of Franco. From the seventh round on, however, Franco, age 25,  began to take over.

His power punches were far more effective than what the 29 year old Moloney was landing, and in the 11th round Franco knocked Moloney down with a vicious right.

The fight went the distance and in the building, if there were fans lucky enough to be packed in, they would have been holding their collective breath.

But no, judge Julie Lederman made pop Harold proud with a proper nod to Franco's superior skills and will. And Patricia Morse Jarman and Dave Moretti did the right thing, too, and the arbiters gave Texan the victory atop the ESPN show. 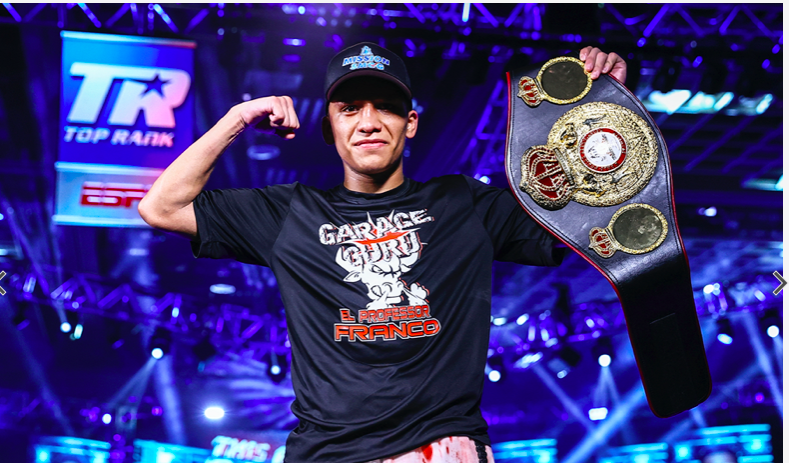 Joshua Franco fought, while Andrew Moloney boxed, for much of the fight, and the judges rewarded the better fighter on June 23, 2020 in Las Vegas.

(Morse Jarman and Moretti had it too close, but why quibble when ultimately, the right result was rendered?)

“After the fourth round, I gained the momentum and figured him out,” the winner said post-fight. “I always knew this was possible.”

And did his heart skip a beat when the cards were being read? “I wasn’t nervous when the decision was being read,” Franco stated. “I knew I’d done enough to win this fight. My coach, Robert Garcia, had me ready. I’m going home with the belt.”

If you'd missed the action, and just turned on ESPN after the 12th ended, you knew something was up. The camera showed twin Jason, his eyes like full moons, as the wheels turned in his head. He knew that his bro quite possible wouldn't have his hand raised. 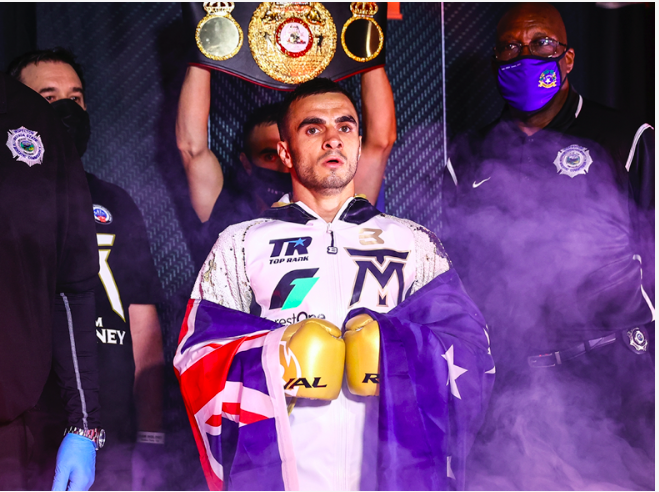 Before the action started, Moloney looked into the ring. Was he thinking that this fight was likely to be the most trying of his career? (Mikey Williams picture for Top Rank)

The first fight of four was a heavyweight battle between Adam Stewart (8-0-1 entering; from Arizona) and Helaman Olguin (7-3; Mexico). The first round started with a clash of heads causing a cut under the right eye of Stewart. Rounds 2-5 were back and forth with not too much action due to both fighters showing exhaustion, although Olguin did land quite a few power shots. Olguin won a majority decision in a fight that wasn’t very technically pleasing.

In a much more exciting fight to watch, two undefeated junior welterweights squared off. Rolando Vargas (5-0 entering, from Mexico) and Miguel Contreras (10-0; from Bakersfield, California) fought in what was basically a competition for a Top Rank contract. Both fighters were busy with their hands although Contreras was much more accurate and effective with his combinations mixing it up between head and body. In round three Vargas suffered a cut on the right eye from a clash of heads but it did not alter the fight much. The unanimous decision after six went to Contreras. Both men left watchers, I thin, wantng to watch them again.

In the co-feature, a battle between featherweights Christopher Diaz (25-2; from Puerto Rico) and Jason Sanchez (15-1 USA) was a good one. Both fighters were cautious to start the first round but began to open up in the later rounds. While not a complete domination, Diaz controlled the pace of the fight and landed the more impactful shots by far. Compubox had Diaz out-landing Sanchez by only 1 punch but that was deceiving. The tallies, 97-93, 98-92, 98-92, for the Puerto Rican, better told the tale. Diaz (landing the right in photo by Mikey Williams) looked really good in this fight. 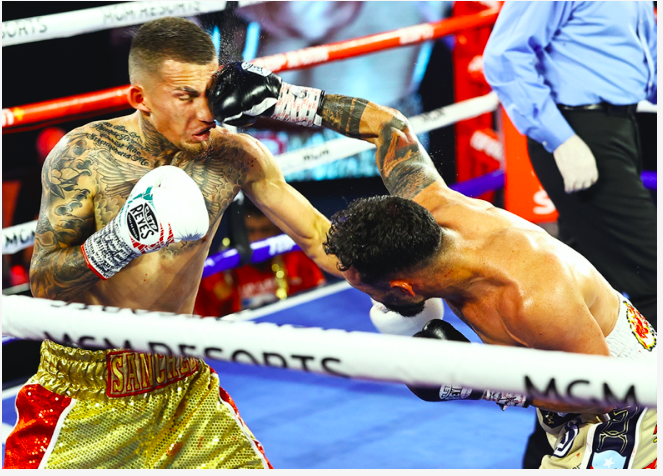 Post-fight, he spoke of future plans. “I can fight at featherweight, or I can make 122 pounds. Whatever Top Rank wants, but I’m ready for a big fight in either weight division. I am a completely different and improved fighter from the one who fought Shakur Stevenson last year,” said the 25 year old.

“My coaches, Nelson Rodriguez and Freddie Roach, got me ready for tonight. I’m ready for a big fight now. Whether it’s at 126 or 122, I’m ready. This is a new Christopher Diaz.”