That will be forgotten by many watchers, though, because a right hand from Jake detonated on Woodley in the sixth round and the winless-in-boxing MMAer fell face first to the mat, stiff and not fully conscious. No count needed, instead there was an immediate call for medical personnel to make sure the 39 year old was OK. He was, he left the ring under his own power, groggy but knowing he made a nice check, though I bet he was irked his mom was so chummy with the winner right after her boy needed all the smelling salts. No count needed, after Jake Paul found a home for his right had, which is legit powerful.

To be fair to Jake, he landed the right in slick fashion, by faking a right to the body–Woodley took the bait, dropped his left hand and that gave Paul the opening.

And, yes, he does have legit power in his right glove, even people who are loathe to see him take up airtime, capital and ring time can admit that. OK, he's no Johnny Rodz. But Paul is unpredictable, and, again, not boring. He'll hit you with sophomoric profanity and then an hour later reveal a donation to a good cause, or rail against Dana White's track record of revenue sharing with the risk taking talent. Pic by Amanda Westcott

Then he calmed a bit. “This guy’s a legend, that’s a tough fighter right there,” Jake yelled of the fallen campaigner.

Helwani hinted that the action was sub par when he asked how Jake thought things were going up until the KO. Jake said blood going into his eyes bothered him, and then complimented Woodley some more. He also threw a dart at Tommy Fury, for shits and giggles. On Tuesday, this back and forth on social media indicated that maybe Jake Paul-Tommy Fury is next, for the record.

“And Jorge Masvidal and Nate Diaz y’all are some bitches for leaving this arena because I know you don’t want that shit,” Paul said, referring to UFC fighters in the building, who jetted rather than hear Jake’s triumphant railing.

And he got a slap in on Dana White, too boot.

“This has to be the greatest moment of my life,” he boasted. Paul isn't boring. If you do give in and watch his fights, you are guaranteed to see weird stuff, like Jake and Tyron reacting in differing fashion as Tyron's mom and Jake's mum yuck it up after the KO. Pic by Amanda Westcott

The kid is not a dolt, at all. Masvidal is 37, Diaz is 36, both are shopworn. Yeah, Jake Paul knows the right angles to play at the right times.

Paul (4-0 entering; from Ohio) beat Woodley (1-0 entering; ex-UFC welterweight champ from St. Louis) by split decision last time (Aug. 29 in Ohio) and was set to move on, so he booked a fight with Tyson Fury’s little bro Tommy. They hyped the battle and then Tommy bowed out, citing injuries, two weeks before the tango. Woodley quickly came to the table and a sequel was set up.

In the first, Woodley wasn’t busy enough. He’s short, so he isn’t suited to fight at cruiser. Jake threw a bit more, but it was a meh round.

In the second, Jake showed decent mobility. He is a deliberate, he doesn’t waste punches, probably so he can hold on to oxygen a bit better. Woodley again stared more than he fired. He’d wait, Jake would explode on him, and Woodley would throw one, maybe, and they’d clinch.

In the third, Woodley came out firing, then Paul answered with a right. An elbow opened a slice on Jake’s fore-head, and Woodley got bolder. The kid is a real fighter, you gotta admit. The cut and blood didn't mess with him in the Woodley rematch. Pic by Amanda Westcott

A Woodley right landed clean, and rather than seek to press the issue, Woodley waited. Too much, but people who know his career say that’s same old story.

In the fourth, the slice stayed closed, so that was nice for Paul. Then, in the last third of the round, the blood came back.

Fatigue by this point became a factor. A judo move by Woodley stood as his best work, he dumped the master content creator to the floor.

In the fifth round, Woodley started as the aggressor. They kept clinching and was there a head butt? Some fans started booing the clinching. I would have too, these two were severely overpaid for the amount of entertainment they provided to this juncture. (NOTE: I wrote this while under the influence of lingering annoyance at dealing with a not-seamless purchasing situation.)

Then, entertainment arrived, with a capital “E”–a right hand sent Woodley to the mat fast and for the duration.

He scores the KO win in the 6th round to stay unbeaten 💥#PaulWoodley pic.twitter.com/kxr4rG0SNB

It looked like Serrano might mow her down right quick, but Gutierrez made it out of the first and Serrano had to expend energy to get that W. Serrano connects with a left on a fighter whose record doesn't at all indicate her biggest assets: a ferocious desire to compete and her joyfulness as she plies the trade. Pic by Amanda Westcott

The 33 years old Serrano, out of New York, likes to hop up and down in weight classes, but she’d probably be happy to fight Katie Taylor, if the price is right, at whatever weight.

Gutierrez is a 38 year old native of Spain; this was a matchup of two not-young practitioners, but there’s no aspersion in noting this fact, the fight showed off skill and will, and Gutierrez, especially, came off as someone you found easy to root for.

Miriam’s signature fight prior to this was a clash with Katie Taylor in Nov. 2020, which she lost via UD10. 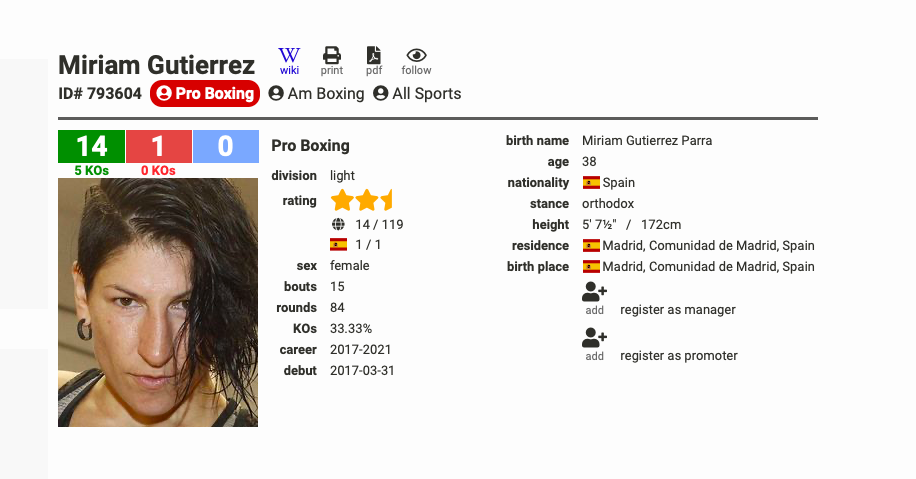 This lady impressed the writer maybe more than any fighter on the card, for her exemplary attitude.

In the first, the lefty Serrano came out fast, she didn’t look to dissect and get loose. Her head movement allowed her to dodge shots, and then she delivered a boat load herself. The ref yelled at Miriam to answer back, as she got whacked back to the ropes. This was a” message minute,” for the second half of the round Serrano was all guns blazing, looking to score a stop.

Things calmed in round two, because Serrano chilled and settled, and Gutierrez got busier. The pace actually got kind of tepid, the crowd started losing some attention. Then Serrano got that volume back up, but it didn’t jolt the watchers as much, because they figured Gutierrez could weather this sort of storm. The loser ate a straight left, on the chin, and it didn’t make her blink different. She weathered the onslaught, and then tossed some of those hail stones back at the New Yorker.

In round five, Gutierrez kept showing a nice skill set. Gutierrez is tougher than anyone you know. Pic by Amanda Westcott

She kept the feet moving, her brother/trainer Jero is a good tutor, so Serrano didn’t have an easy time getting a bead on her. Then, did I see her grinning wickedly as she tossed a right hand? Well, she looked like she was having fun. In the sixth, Gutierrez mixed her shots, she’d poke the belly of Serrano, then try a lead right, and she’d seek to land a hook that, to be honest, looked a little slow and weak most of the time.

In the seventh, the Serrano power started to show, as blood leaked from Miriam’s nose. Serrano was clearly now in “let’s get this effer finished” mode. Nope, Serrano didn’t carry the momentum and finish the job on the hard-as-leather woman from Spain in round eight, because Gutierrez didn’t crumble. In the ninth, Serrano stuck and moved, as her trainer Jordan Maldonado advised her to coast some, and save energy for a balls-out surge in the final round.

The surge came, Gutierrez handled it, and gave plenty back as they stood toes to toes and hurled bombs. The bell rang and yep, there was that big grin from Gutierrez.

Bless her, she’s built to do this, mentally and emotionally. Trainer Maldonado went over and told her she’s the bomb, and kissed her on the top of her head.

Their fight juiced the fans, it was sloppy but fun-and-furious sloppy. Williams had done wrestling, so he seemed more at ease doing the fistic combat. Pic by Amanda Westcott

“Honestly, I probably looked terrible out there,” said Williams, who reiterated this is a one and done thing for him. “I felt like my last five sparring sessions I was on point. My head wasn’t coming up. As soon as you get out here and you start getting touched, it’s a whole different thing. All your training goes out the window. It was fun. I had a chance to get out here, but like I said coming in, it’s one and done.”

Williams impressed me when he literally threw Gore through the ropes, almost onto the floor in round two of a four rounder.