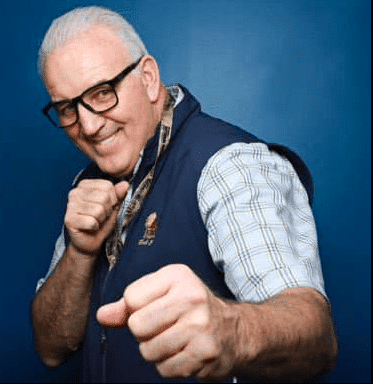 Count big Gerry Cooney as one who believes in Mike Tyson, and thinks at 53, we shouldn't all dismiss out of hand that the wizened being once known as Kid Dynamite could be older but wiser now…and still present some problems for Tyson Fury, Anthony Joshua and Deontay Wilder.

The New Jersey resident, an ultra-affable extrovert who co-hosts a boxing shows with Randy Gordon on SiriusXM, told NY FIGHTS  that he saw “The Clip.”

And guess what? Cooney is now in a mindset where he'd like to do more teaching. He'd be open to chatting with Tyson, see where his head is at regarding doing fighting again, and seeing if they mesh.

Yes, Gerry Cooney is thinking just maybe he could train Mike Tyson and do some damage in the heavyweight division. He had that eye of the tiger and his left hook made dust of ribs. New Yorker Cooney now says him and Mike Tyson could maybe be a great team.

“Mike is 53, he's learned a lot about himself,” Cooney told me. “He had a lot of rage, from where and how he grew up. Then Robin Givens and Don King got to him, that fucked him up. Yes, he's 53. But Joshua, Wilder, Fury, they don't take it so good. Listen, Mike's not gonna stay on the outside.”

Me, I'm thinking Tyson could be dangerous for 30 seconds, but he'd be huffing and puffing and open for business in taking punishment right quick. (Yeah, I don't think all that reefer would be doing Mikey any favors, his lungs would be barking at him too quick.) Cooney isn't of the same mind. The 6-6 bomber, who worked ribs like a pitmaster in the 70s and entered into clashes with Ken Norton, Larry Holmes, Michael Spinks and George Foreman, would I think be a great fit to work with Tyson.

He had his own crosses to bear from a rough upbringing. Fear, doubt, insecurity wormed their way inside his head, and he saw the light, and ditched booze therapy to quiet the dark chatter. He's clean and sober and knows that mindset is of vital importance in suceeding in any venture. “Mike could go five, six rounds, hard,” the 63 year old boxing lifer continued. “With this new purpose, he could get through camp. I think he will do exhibitions, and he can make a lot of money doing that. Woodsy, he's matured a lot, and he misses the glory, too. If Mike bangs those guys' ribs, they're going out!”

Gerry came up on the island, but he made the rounds. He saw teen Tyson, who was backed by Cus D'Amato, and knew he'd be a wrecking ball. Cus was working with another heavyweight who called Huntington, Long Island home, Greg Walsh. So Cooney had a real good idea of the strengths of Tyson and some of the mental weaknesses he's had to combat. Yes, he identifies with the pain delivery agent from Brownsville, Brooklyn. (I recommend you purchase Gerry's book, he shirks not at all from examining all angles of his life journey, and the spiritual ups and downs he's handled.) “Tyson,” he acknowledges, “at times has been his own worst enemy.”

Cooney is an optimist sort, but know this, he's also a realist. “I don't really think it's gonna happen, Mike fighting, not just exhibitions. But when you finishing fighting, retire from it, you learn more. As a trainer, it would not be rocket science, me working with Mike. He'd have to get inside, but don't stay in his comfort zone, keep the hands up on the way in. He'd do what he still does best, he's a beast of a puncher.” Listen to Gerry Cooney talk boxing with partner Randy Gordon on SiriusXM. They've been a dynamic duo since 2010.

Man, the combo of Cooney in the corner, and in the lead up to that comeback fight, with Iron Mike.  I like the concept.

Cooney says he would need to sit down with Mike, because, hello, he's a grown man. They'd need to mesh.

I put forth that Cooney would have to be in charge, at least a 51-49% dynamic, and Mike would have to accept and listen and follow his input. I think, because Gerry and Mike have both traveled rough roads emotionally, dealing with baggage, it would be a fruitful pairing.

“In the corner to my right, trained by the heavyweight standout Gerry Cooney, from Brownsville, Brooklyn, with a record of 50-6, the youngest boxer to win the heavyweight championship, Iron…Mike…TYSON!”

I'd watch, so would you.

Maybe Mike Tyson Can Come Back, Make Some Noise In the Heavyweight Division