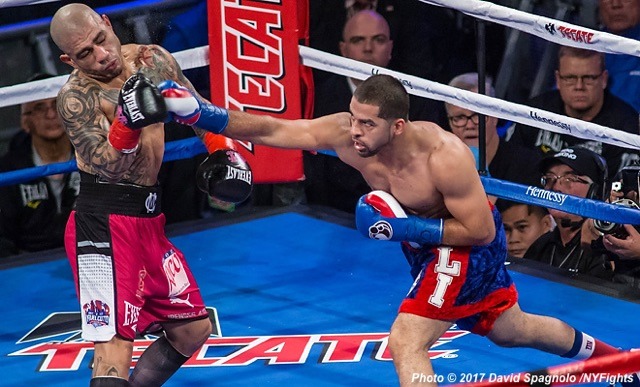 They were so loud.

As if convened for one big office party inside of Madison Square Garden to send a beloved worker off into retirement, a partisan crowd of 12,371 mostly obsessed Puerto Ricans showered Miguel Cotto with an ovation so loud that it appeared to make a large cup of Sprite boil.

Tables shook as Cotto shimmied flurries during the 12th round as it winded down to 0:00. Then, Sadam Ali snatched the gold clock with the legendary Boricua's name engraved in it, before sticking his hand in the cake, licking and sucking his middle finger, and sticking it deep in the air at every fan and journalist who suggested that he had no damn business being there.

All at once a tyrannical dictator and a most sublime war dissenter, Sadam Ali fought with the full incongruous nature that his name suggests. As images of a Jessie Vargas assault kept interrupting the LIVE action in real time, Ali was rocking Cotto in ways not seen since Manny Pacquiao committed battery against him.

Every time I wanted to believe that the “World Kid” was lying about a performance few doubted he could deliver, Ali would glance truthfully over at screaming ace seated beside me at ringside, Zachary Ochoa (who also collected a W), with a look that be like: “I got this.”

Still, after five rounds, though I had Ali slightly ahead, there was an air of impending doom attached to a lead no thicker than dental floss. Cotto did indeed turn up, pressing the attack behind a solid jab and crisp combinations. The grinding, debilitating body work Cotto unleashed between rounds 6, 7 and 8 was impressive, but it emptied the reservoirs of his conditioning as Ali's stayed on point. That, coupled with a physical breakdown (torn bicep), produced a gradual beat down, as Cotto (41-6, 33 KOs) went into complete survival mode– and stayed there.

All three judges correctly scored the last four rounds for Ali (26-1, 14KOs). In theory, Ali did take Cotto's “gold clock” of a WBO belt rather rudely as a form of poetic justice. Miguel had become more a symbolic champion than a real one. Do you think he's the WBO super welterweight champion on August 26 if WBC enforcer Jermell Charlo is in front of him instead of Yushihiro Kamegai?

The icing on the cake was supposed to be Ali, who had other plans under a steady corner lead by Andre Rozier. No children wanted Ali to kill Cotto (as the people of Zaire had ordered “The Greatest” with George Foreman long ago), but deep within the hearts of a devastated Yemen facing atrocity, Ali has now provided much needed hope and pride to the region.

His options are now rather interesting. Ali indicated that had Jessie Vargas (who scored a massive 8th round KO over Ali in March 2016) been in the ring instead of Cotto on Saturday night, he would've exacted a brutal revenge– and still wouldn't mind getting it. Then there's a possibility that the lively Welsh product Liam Williams gets a crack.

For now, Sadam Ali is the new WBO super welterweight champion of the world, with every right – and reason – to throw a private party we media ain't invited to.

Unless he wants to throw cake in our faces.