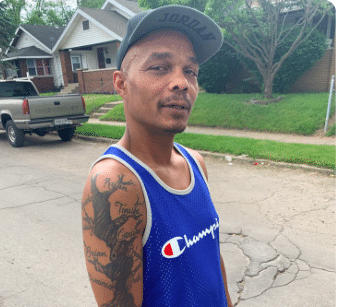 Reggie Strickland was a lot better fighter than his record of 66-276-17 (14 KOs) would indicate. If you think the record is a misprint, you are wrong. Between 1987 and 2005, Strickland traveled the highways and byways of America’s heartland – and beyond, fighting anyone, anywhere, more often than not on short notice.

Over 228 months as a pro, he laced up the gloves a total of 359 times, which averages out to 1.6 fights per month. He said he had even more bouts than what is on his official record, and the breakneck schedule was a lot harder on the vehicles that took him to the boxing venues than his body, mind, and soul.

At age 52, he still weighs near his super middleweight prime, his body is lithe and muscular–see below–with nary a nick on his face, and his faculties are intact. “Here’s the deal,” said Strickland, a Cincinnati native who has lived in Indianapolis for many years.

“I was fighting all these boys in their hometowns, where I was never gonna get the decision. I lost a lot of decisions I should have won. If you look at my record, I lost lots of decisions to guys that were considered knockout punchers, but they couldn’t touch me.”

Strickland believes that he got robbed in the Bailey fight but was pleased with his performance because Bailey had a fierce reputation as a knockout puncher.

“Bailey was supposed to be my toughest fight, but it was easy and I broke up his knockout streak by going the distance,” said Strickland.

Strickland beat Brent Cooper, who appeared on the television series “The Contender,” while losing decisions to other reality TV participants Jonathan Reid and Anthony Bonsante.

He described Bonsante as “solid and a good body puncher,” and Reid as “a karate guy who did nothing spectacular and was not much.”

Strickland said one of the only fighters who gave him genuine trouble was Buck “Tombstone” Smith, a hard-punching, well-traveled 228 fight veteran from Oklahoma City who beat him four times by decision in 1994 and 1995.

“Buck Smith had heavy hands, it was like he had pipes in them,” said Strickland. “But he didn’t stop me. We have a lot of mutual respect, and we still talk.”

In April 1995, Strickland traveled to San Paolo, Brazil, to take on local power puncher Luciano Torres. He said he was coasting to what should have been an easy decision victory when an interloper climbed the ring ropes towards the end of the fight and threateningly told him he would not be paid if he had the audacity to win. The fight was stopped in the final round.

Strickland recalls driving over 10 hours for a bout in Arkansas. He arrived shortly before the show was to begin and observed only a handful of fans in attendance. He located the promoter and demanded he be paid cash in advance – or he was getting back in his car and heading home. That “biggest loser” could whup most men who haven't studied pugilism, let's be clear about that

“I made him empty the box before it was even filled,” said Strickland. “I didn’t drive 12 hours to take a check. All the other fighters got bounced checks. My motto was always cash only. I learned the hard way.”

Strickland also spent time in Don King’s training camps in Florida and Ohio, earning as much as $750 per week sparring with the likes of the mercurial welterweight titlist Ricardo Mayorga.

Mayorga was considered crazy because his wild antics and trash talking outside the ring rivaled his dirty tactics inside of it. He would often light up cigarettes after a victory.

“Mayorga was just nuts – and not as hard of a puncher as people thought,” said Strickland. “He just slapped – and he was so easy to hit they sent me home.”

Of all the promoters Strickland dealt with over the years, the only ones he would trust enough to accept a check in lieu of cash from are Don King and Lou DiBella.

“There are so many bad people in boxing, you really can’t trust anyone,” said Strickland. “But Don King always treated me right and Lou, who I work with now as a promoter and matchmaker, is always straight.”

Strickland said that he was a good amateur boxer who won 72 of 90 bouts. His biggest victory was against Nashville’s Obie Beard, the brother of Jackie Beard, who qualified for the 1980 Olympic team that did not compete because of the United States boycott over Russia’s invasion of Afghanistan.

Reggie followed his older brother, Jerry Strickland, into the pro game. Jerry was also a well-traveled journeyman who retired in 2000 with a 13-122 record. He passed away two years ago from cancer and Reggie still gets distraught while talking about him.

Kansas City matchmaker Peyton Sher started booking bouts for Reggie on the road, where it was tough to beat the local fighters. Before Strickland even realized what was happening, he had a reputation as a reliable opponent who would give much-needed rounds to local stars, and not embarrass himself or the promoter.

Former Indiana Boxing Commission official Jake Hall said there could not be club shows without fighters like Strickland and other reliable opponents.

“Those guys come in and make fights entertaining enough so people buy tickets,” Hall told the Orlando Sentinel in 2003.

“Do I think he’s going to win? No. Out of 45 times that I’ve seen him fight, I’ve seen him win three where he really tried. And he can box, and he knows how to take care of himself. If he had started out when he was young with the right people, he could have been a champion – seriously.”

For the better part of two decades, Strickland lived out of his car and gym bag, traveling to casinos as well as civic centers, bingo halls, high school gyms, sports cafes and nightclubs, outdoor fairgrounds, farm buildings, and shrine temples to lace them up.

“Someone has to be the loyal opposition,” Fred Berns, a Midwest boxing promoter, told the Orlando Sentinel in 2003.

“Look at Northwestern and Indiana in the Big Ten. Without them, who would Michigan and Ohio State beat up on?”

In a 2020 article, the London-based Daily Mail described Strickland and four other perennial losers as Chumps of the World.

Strickland takes offense to the notion that he was beat up on or a chump. He insists that he was always ready to fight, rarely got winded or hurt, and would have beat many of the better boxers who defeated him if given more time to train or not being afflicted with unhealed injuries from recent bouts.

Against Todd Foster, for example, he said he was nursing bursitis in an elbow and was a one-handed fighter but still went the distance.

He claims to have fought Alex Bunema on two days’ notice and said Bunema “didn’t do anything memorable.”

“Nobody ever gave me six weeks to prepare,” said Strickland. “They knew that if they did, their fighter was in danger.”

At the end of his career, Strickland weighed as much as 216 pounds squaring off against heavyweights such as Troy Weida and Jeff Yeoman.

“I had some muscle on me, but also had the McDonald’s belly,” said Strickland who now weighs in at a fit 175 pounds.

Strickland augmented his income by working as a roofer or on a paint crew, as well as a restaurant cook, and shoe and home security system salesman.

But boxing was what he did best, enjoyed most, and was able to make a good living out of it.

“I fought to get paid, and I would have fought my mother if I got paid,” he joked.

Strickland, who is on his third marriage, is the father of 10 children who range in age from 32 to 3. His youngest children keep him feeling young and he still runs and does occasional bag work.

He works as a property manager and matchmaker for a promotional company called Dem Paws, which will be promoting an outdoor boxing show on July 23 at the Blended Family Events Center in Indianapolis.

“I love running the shows,” said Strickland, an unequivocal boxing lifer. “We usually just break even, but that means we can do another show.”

Asked if he looks back on his career with any regret, Strickland says hell no.

“I’m not a loser and anyone who says that can kick rocks,” he asserted. “I fought in almost every state and several countries, made a few thousand a month, paid my taxes, and didn’t get hurt. Everyone knows I can fight and anyone who got in the ring with me knew they were in a fight.”

Mladinich, a former fighter and retired NYPD detective, is an author, screenwriter and actor.