NEW YORK (April 30, 2019) – A record turnout honored the Class of 2019 at this past Sunday's eighth annual New York State Boxing Hall of Fame (NYSBHOF), sponsored by Ring 8, at Russo's On the Bay in Howard Beach, New York. 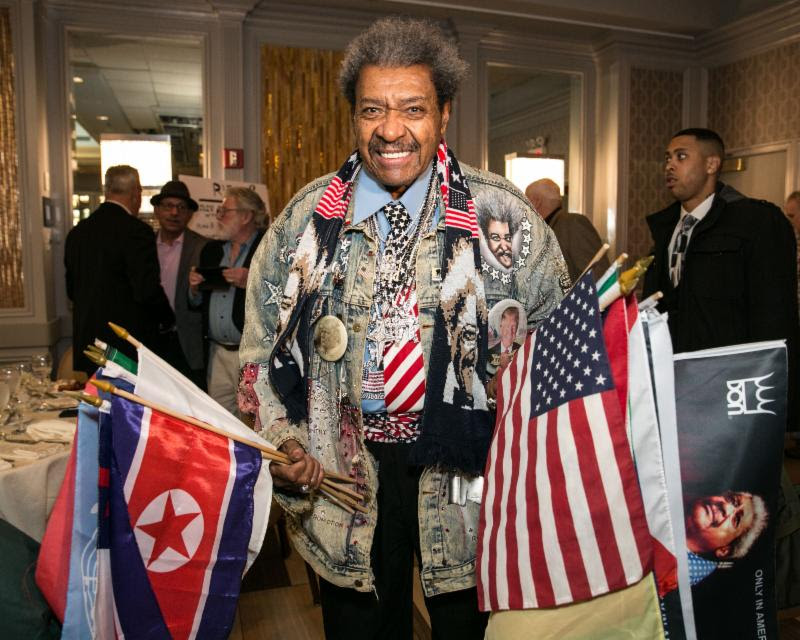 Inimitable promoter Don King led the 24-member Class of 2019 into the NYSBHOF
“We had our largest attendance, 402 people,” a happy and proud NYSBHOF president Bob Duffy said at the event. “This is the way we show our appreciation with this special belt for these New Yorkers for what they've given boxing through the years. Thanks to a lot of peoples' efforts this is our eighth year. I hope we can do another 50. I'd like to thank everyone of these inductees, and their family members for their support. It's all about family.”
Living boxers heading into the NYSBHOF include (Bronx-born) three-time, two-division world champion Wilfredo Benitez (53-8-1, 31 KOs), (Hempstead) WBO super featherweight world champion Rogelio Tuur (46-4-1, 30 KOs), (Bronx) 1968 U.S. Olympian Davey Vasquez (19-15, 6 KOs), WBO super middleweight world title challenger Michael Olajide (27-5, 19 KOs), of Manhattan, New York welterweight Dick DiVeronica (44-13-1, 13 KOs), and Queens' world heavyweight title challenger Monte Barrett (35-11-2, 20 KOs).
Posthumous participants being inducted are (Bronx) three-time lightweight world champion Jimmy Carter (84-31-9, 34 KOs), Brooklyn welterweight Al “Bummy” Davis(65-10-4, 46 KOs), (Schenectady) world welterweight champion Marty Servo (47-4-2, 14 KOs), (Bronx) world heavyweight title challenger Roland LaStarza (57-9, 27 KOs), Brooklyn world lightweight champion Paddy DeMarco (75-26-3, 8 KOs )and Manhattan's Lower East Side lightweights Sid Terris (94-13-5, 12 KOs) and Leach “The Fighting Dentist” Cross (35-10-4, 22 KOs).
Living non-participants heading into the NYSBHOF are New York City-based promoter Don King, Flushing judge John McKaie, referee Arthur Mercante, Jr. Brooklyn sportscaster Steve Albert, and Bronx trainer Bob Jackson.
Posthumous non-participant inductees are Utica matchmaker Dewey Fragetta, Corona, Queens referee Johnny LoBianco, Garden City referee Wayne Kelly, Flushing sportsman Harry Hill, award-winning journalist Jimmy Cannon, of Manhattan's Upper East Side, and NYSAC official/former NABF president Joe Dwyer, of Brooklyn.
Each attending inductee (or direct descendant of) received a custom-designed belt signifying his or her induction into the NYSBHOF.
The 2019 inductees were selected by the NYSBHOF nominating committee members: Randy Gordon, Henry Hascup, Don Majeski, Ron McNair, and Neil Terens.
All boxers needed to be inactive for at least three years to be eligible for NYSBHOF induction, and all inductees must have resided in New York State for a significant portion of their boxing careers or during the prime of their respective career.
INDUCTEES' QUOTES & PICTURES
Bob Jackson: “It's hard to speak at times like this when being honored by friends. It's been a great run. I live on memories and I have thousands. They keep me going. Never give up, always keep punching.” 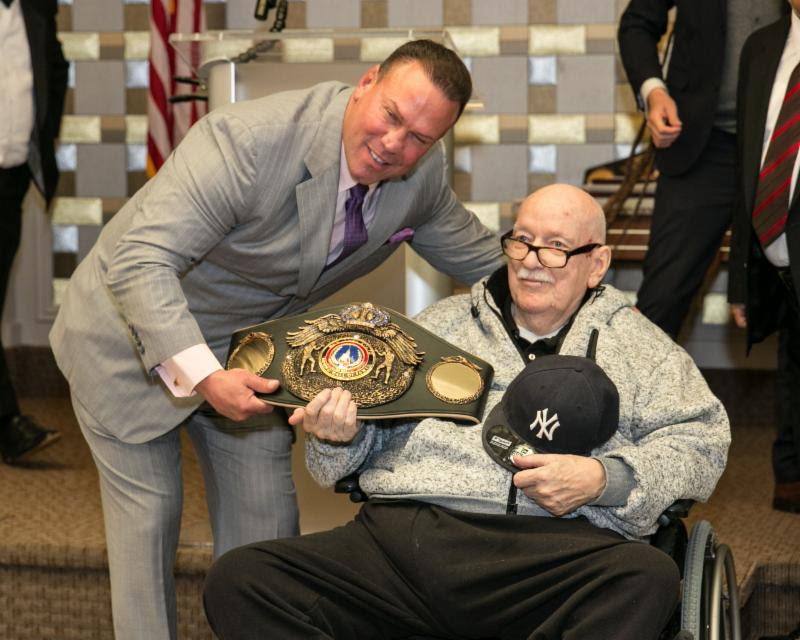 (L-R) presenter Vinny Maddalone & 2019 NYSBHOF inductee Bob Jackson
Regilio Tuur: “I was a black kid from Holland fighting in the Olympics. Pretty much a nobody fighting the U.S. champion. They bought my return plane ticket before I even fought because they though my opponent was unbelievable. I trained to fight him, a southpaw, for a year and had a big fight hand that nobody knew of. I wanted to come to American and make by father proud. I retired from the pros) undefeated and make a lot money. I'm honored today. I had a great manager, Stan Hoffman, who is a man who made us men. Standing here today is a dream.” 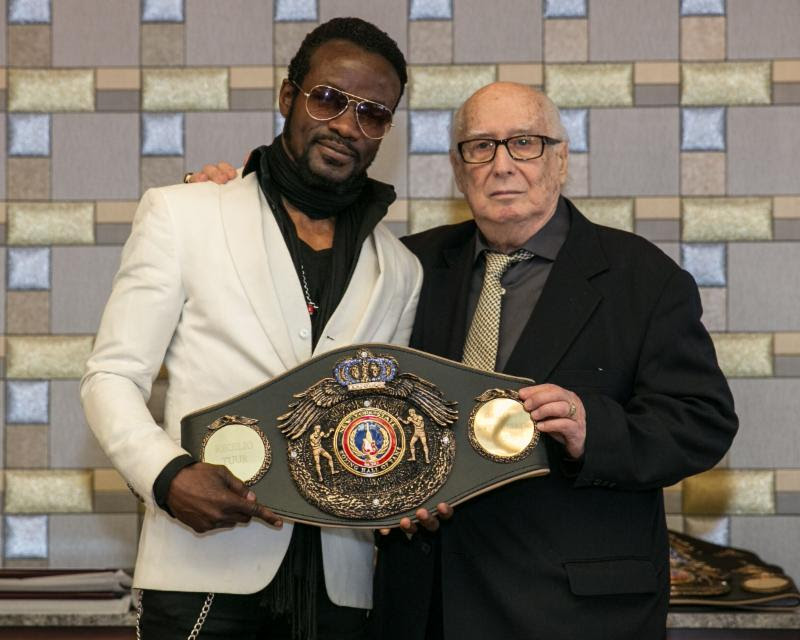 (L-R) — 2019 NYSBHOF inductee Regilio Tuur & presenter Stan Hoffman
John McKaie: “I have a great job and to be honored for something I really love doing is a great honor. I'd like to thank various commissions for licensing me, but New York is my home. I'd like to thank all the boxers because it's been a pleasure judging them.” 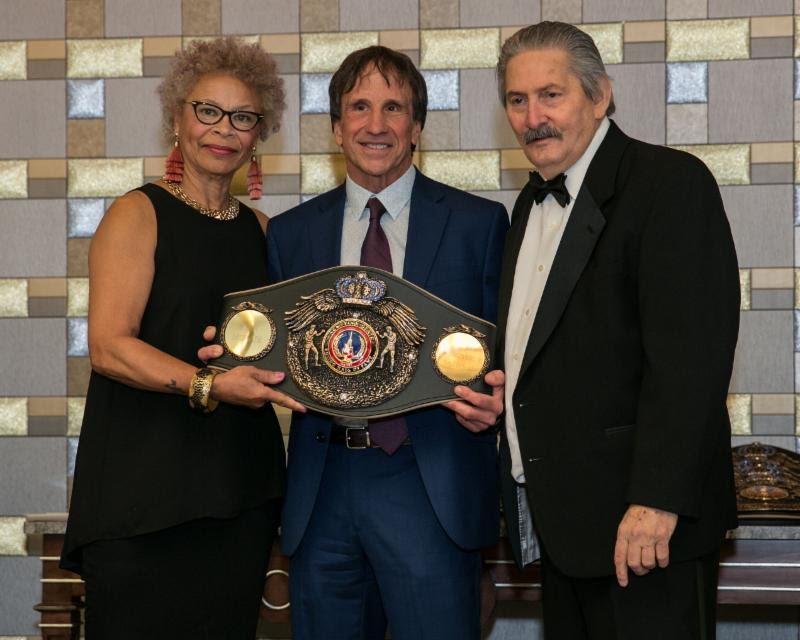 (L-R) – Presenter Melvina Latham, 2019 NHSBHOF inductee John McKaie and
NYSBHOF president Bob Duffy
Monte Barrett: “Congratulations to everybody up here. There's so much history in this room. I've been in boxing 18 years and have a select memory, but there have been so many amazing experiences and accomplishments. I love this guy (trainer Jimmy Glenn). A lot of managers don't even ask how you're doing. My manager was the great Stan Hoffman. He gave me $50,000, $3000 a month and another $1000 for insurance without a contract. Stan said: ‘How you doing? I believe in you and love you.' In 2005, I was having an argument with Don King about money. He said, ‘Life is a negotiation.' Well, I'm negotiating now, and I'm in the Hall of Fame.” 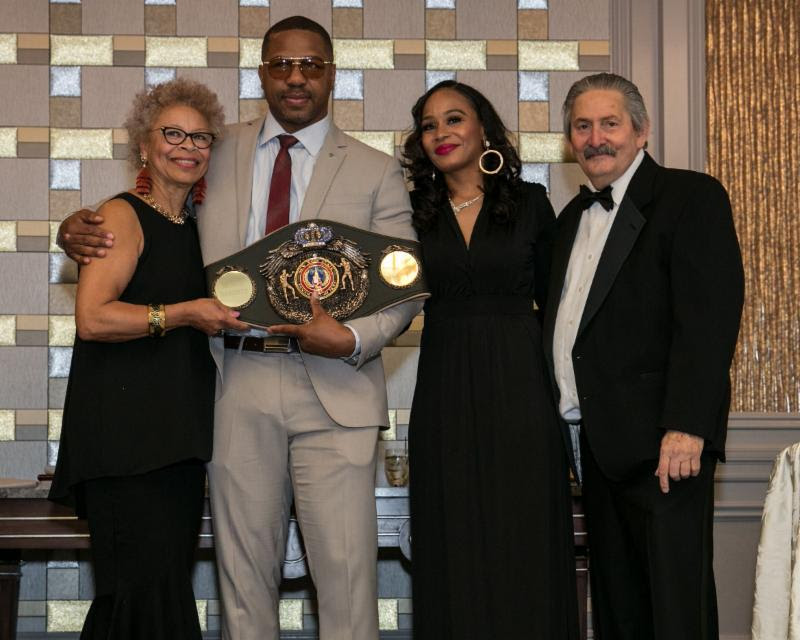 (L-R) – Presenter Melvina Latham, 2019 NHSBHOF inductee Monte Barrett and his wife, Shaneka, and NYSBHOF president Bob Duffy
Arthur Mercante, Jr.: “What a great honor it is to be recognized by Ring 8 and the boxing community. In 2012, my dad was inducted into the New York Boxing Hall of Fame Now he's looking down today and he's so proud. I entered the Golden Gloves at the age of 17. Un the quarterfinals I lost to a great fighter and Hall of Famer, Juan LaPorte. Like any boxer, I thought that I had won, and wanted aa rematch. My father told me I didn't like road work and just lost a three-round fight. He asked if I'd like to be a referee. I started in 1979 and my father made me work five years before turning pro. I went on to ref so many great fights, including one on the same card with my father at Radio City Music Hall. My greatest fight was Lennox Lewis versus Evander Holyfield.” 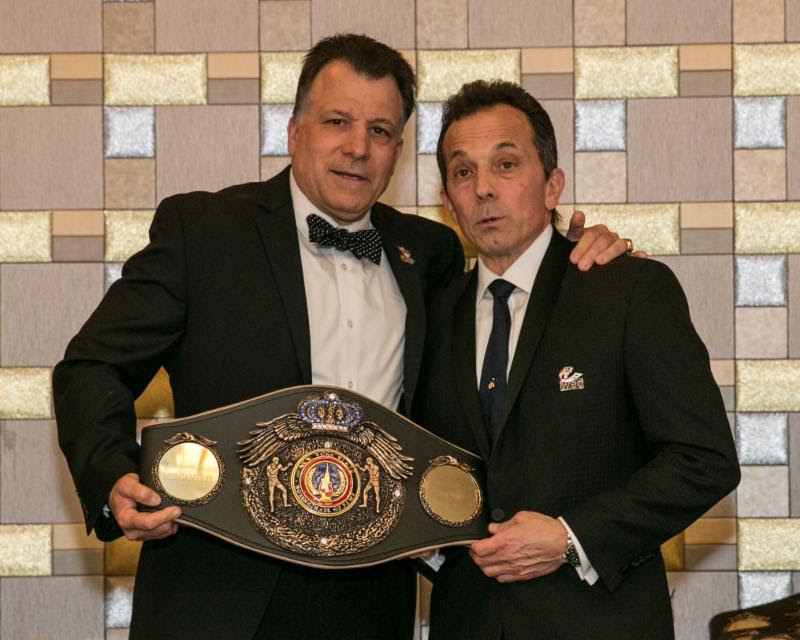 (L-R) – 2019 NYSBHOF inductee Arthur Mercante, Jr. and presenter James Mercante
Michael Olajide: “I'm really honored to be here today. My history in boxing goes back a little now. There's nothing better to be honored by those who are a part of your profession. Thank you. I've had an incredible journey: Liverpool to Canada to New York. Boxing has given me so much. I wouldn't be the person I am without boxing. To live is to fight. Boxing and life are synonymous” 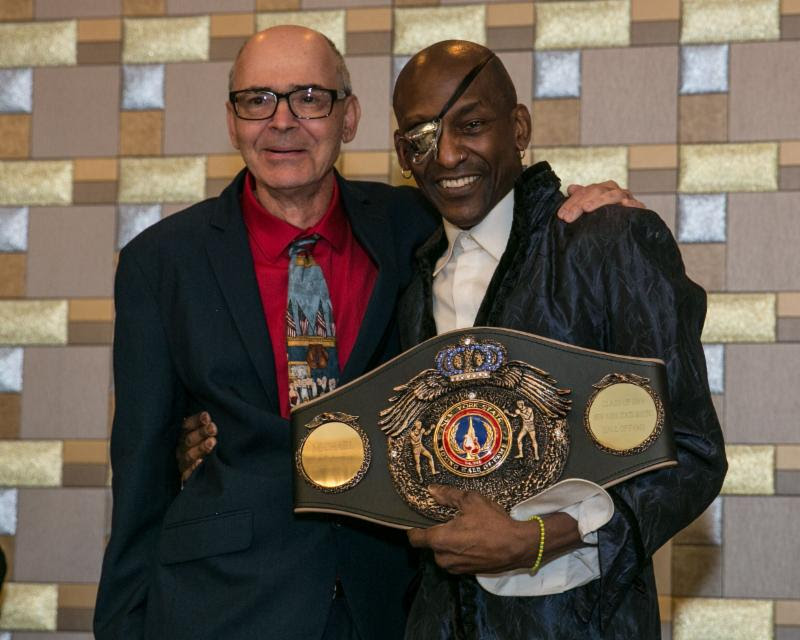 (L-R) – Presenter Jack Hirsch and 2019 NYSBHOF inductee Michael Olajide
Steve Albert: “It is a tremendous honor to be honored by these luminaries. To be recognized in your own state is special. This is a celebration of all of New York. I worked 23 years for Showtime Championship Boxing, from 1987-2010, and the most dramatic was Corrales-Castillo I, one of the greatest fights of all time. I got the see the world because of boxing, but it was the lighter moments I remember most. Only in boxing do you have these characters and amazing experiences.” 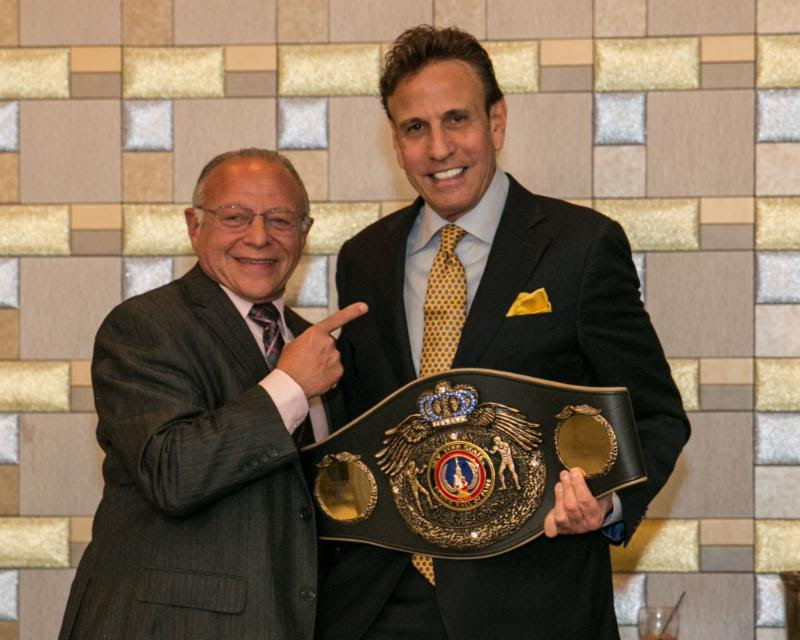 (L-R) – Presenter Randy Gordon and 2019 NYSBHOF inductee Steve Albert
Don King: “Only in America, right? I'm happy to be inducted into the New York State Boxing Hall of Fame. O got into boxing with Muhammad Ali for his first fight and he stayed with me. A black and a Jew, me and Al Braverman, revolutionized boxing. Mario Cuomo gave me my license to promote in New York. One of our three offices was at 30 Rockefeller Center overlooking this great city. New York is a great city and stayed, so good they named it twice, New York, New York. I'm proud and privileged for all the young men and women honored here. I'm so proud to be inducted with them today. I'm here because New York played such a vital role in my career. I'm happy to be here today to accept this award. I got my belt!” 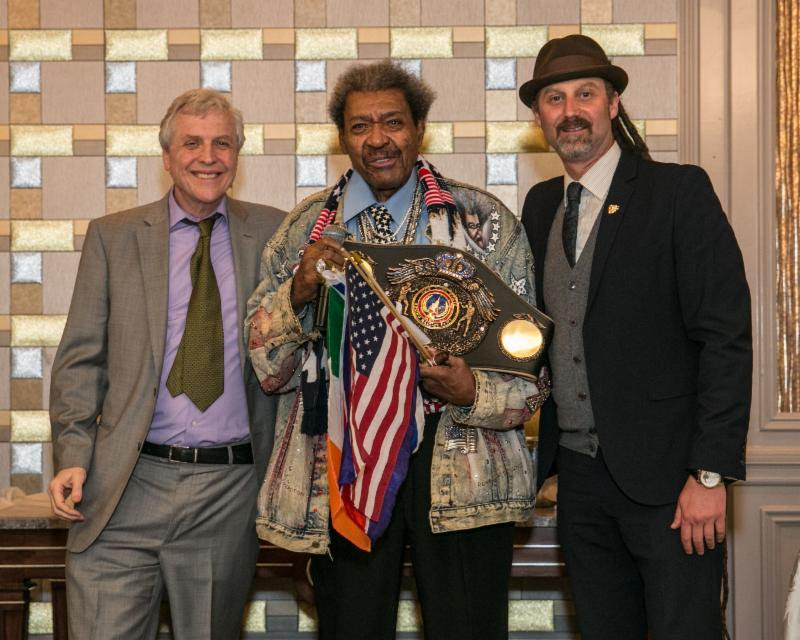