Re: Boobs and Boxing The only stupid question is the one not asked, is what I tell myself before asking boxer Heather Hardy a question that I feel like should already know:

Is there an unwritten rule among women fighting each other that they won’t aim punches at the opponents’ chest, because that can be a sensitive sector of tissue and nerves?

“Not at all,” Hardy told me, and she didn’t even blast me for being ignorant. “Females have the option of wearing a chest protector. I never really got hurt being in the chest, anyway.”

OK, so why don’t we see more punches aimed at the breasts?

“I think because it hurt more getting punched in the face,” Hardy said. “Or the solar plexus. So aiming for the boob is like aiming for the shoulder. Could be effective, but why waste the energy when you really want to hurt someone.”

The testicles, as is known to owners, are extraoridarily sensitive. A flick can reduce you to rolling on the ground, making you feel like you want to barf across the room. So, boobs are not like that?

“Not comparable,” she said. “If it were, they might have the same kind of rule, like for a low blow.”

However, “it might be different to girls who have boobs. Never heard anyone complain though.”

Hardy suggested I touch base with Franchon Crews-Dezurn (below; age 31; 3-1 with 1 KO; from Baltimore), because this subject came up when Hardy Re-Tweeted a Franchon post which made clear she appreciates the sportsmanship exhibited when a sparring partner tags her sharply on the chest area and then acknowledges it. 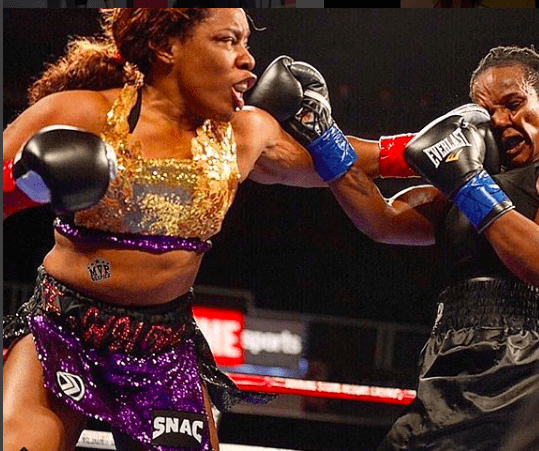 Franchon tells me she too has no treaty, unofficial or otherwise, to avoid the chest area when she’s fighting. “I’m a savage, I’m trying to hit you where ever is a legal blow,” she says. She will often spar guys, and some of them have a hard time letting themselves get into a mode where they will fire hard at her. They generally get up to speed when she tags them a few times.

“For the most part, getting hit on the (chest) doesn’t bother me,” she continues. “That time of the month it can be more painful.”

Yep, it goes under-reported, athletes compete during those times of the month. Many women don’t want to mention that fact, because it can come off as excuse-making. Franchon says she’s won tourneys while on her period and says it’s just a fact of the fighting life.

“We’ve been fighting so long for equality, I’d never use it as an excuse, I’m just going to work harder on my defense. I don’t wear the extra protection, but if you’re a girl and want to feel free. I want to be as close to the guys as I can,” she states, in order to give naysayers less to whine and critique about.

Oh, and one other thing Franchon points out…

“There are some male heavyweights with bigger boobs than me!”