Although willing and eager to prove himself against other top talents, a rematch clause brought unified, undisputed lightweight world champion Devin “The Dream” Haney back to Australia for a rematch of the opponent he dominated in June, George “Ferocious” Kambosos Jr.

Haney will return home to Las Vegas with all of his titles, sending the Melbourne fans home disappointed for a second time. Haney (29-0, 15 KOs) delivered another brilliant demonstration of boxing skills, winning a unanimous decision by scores of 119-109 and 118-110 X 2 to remain the unified, undisputed lightweight champion – wider margins than in the first fight. “I went in there. I knew he was looking for the jab, so we wanted to show him other tools in our arsenal. My dad wanted me to throw the hook more. It was the right that won me the fight tonight,” said Haney. “Against a southpaw,  the right hand is always on the money.” When George Kambosos Jr. switched stances in an attempt to throw off Devin Haney, he stayed patient and made a quick adjustment. Photo: Mikey Williams/Top Rank Inc via Getty Images

Four months ago, Haney went all in on himself in a way his peers haven't, traveling 8,000 miles to Australia ad winning a definitive decision over national hero Kambosos Jr. In doing so, Haney became the youngest undisputed champion in the four-belt era at age 23.

Kambosos Jr. (20-2, 10 KOs) enjoyed boxing's biggest victory lap when he won three of the four lightweight bets from Teofimo Lopez Jr. After losing to Haney, he went radio silent, apparently buckling down to train without the distractions of the spotlight. Kambosos Jr. vowed he would change his approach in the rematch. He tried coming out much more aggressively, bouncing from an orthodox to a southpaw stance and flicking punches at Haney.

Haney observed the timing and distance of what Kambosos Jr. had to offer, picking up the pattern. By trying to throw Haney off, Kambosos Jr. couldn't set his feet down to maximize force on his power punches. Instead, he was off balance. Haney maintained his position and balance so he could strike, then clench to force Kambosos Jr. to slow down.

Haney said it only took him one round to adjust. It was the single round Kambosos Jr. won on all the cards. “When he first came out, I didn't exp to be switching, but I easily caught on to his time and angles, and I started picking my shots.”

Haney put an even more definitive stamp on the results. Haney told NYFights in an interview several weeks before the fight he had no need to reinvent the wheel because Kambosos Jr. had run out of ideas. Kambosos Jr. gave it a try, but it wasn't long before the fight became target practice.

By the end of the fifth round, Kambosos Jr. had run out of steam, run out of ideas, and looked more like the fighter who lost those titles to Haney in June. The partisan crowd of 14,000 at Rod Laver Arena in Melbourne grew quiet. Devin Haney teed off on a bloodied, battered George Kambosos Jr. to put a stamp on his win. Photo: Mikey Williams/Top Rank Inc via Getty Images

By the ninth round, both men had cuts to worry about. Haney said his cut over the left eye was due to a headbutt. Blood trickled down his face. It fired up Kambosos Jr. enough for one last push, but then Kambosos Jr. suffered his own cut in the same place from a Haney right hand. Haney finished with a bloody firefight, delivering a beatdown on Kambosos Jr.

Kambosos Jr. came forward on wobbly legs, not landing enough to seriously threaten Haney. No one can doubt his determination or bravery.

After the fight, Kambosos Jr. was gracious in his comments about Haney's performance. I gave everything  I had in this fight. He's a pound-for-pounder, the best in the lightweight division,” said Kambosos Jr. “I'm very proud of myself. I gave it everything in training. I left no stone unturned. He's just a great fighter. I hit him with big shots. I hurt him. He's back on that jab, he knows how to move and get out of the way. Full respect to this man.”

Once again, Haney used his four-inch reach advantage, superior footwork, and brilliant defensive skills to keep Kambosos Jr. at a distance. He poured cold water on any attempt at a firefight. This takes discipline and a constant change of levels. If it were easy, everyone would do it.

Haney highlighted his versatility in making his case for pound-for-pound status. “I beat you with the jab the first fight. I bring something different to the table this fight. I put the pressure on him more. I hit him with more right hands, I threw the hooks, I fought more, and I showed him I could beat him at his game as well.”

On the strength of this performance, Haney reinforced his argument for inclusion on the top ten pound-for-pound list. The slight by the RING Magazine and ESPN ratings and exclusion on lists from multiple boxing media remains stuck in Haney's craw. Perhaps now Haney should say thanks to Dougie Fischer, Chris Mannix, Teddy Atlas, and those who'd held Haney out of the top ten for the extra motivation. Based on his performance Saturday, he shouldn't be excluded again.

“I showed I don't have one-punch knockout power, but I have respectable power. I'm a true champion. I rehydrated. I showed I'm still powerful at 135, although I'd be more powerful at 140.”

Haney returned respect to the challenger. “He's a warrior, I take my hat off to George Kambosos and all the Australian fans that came out. Thank you for so much hospitality.”

It's unknown whether Haney stays in the lightweight division or moves up to 140 pounds. At lightweight, Vasiliy Lomachenko looms. Whatever the choice, the time is here for Davis, Garcia, and Lopez to prove what they're made of.

It was a good night for the Moloney family. Both brothers won their contests with ease, if not excitement or elegance. Super flyweight Andrew Moloney (25-2, 16 KOs) and Norbelto Jimenez of the Dominican Republic (31-10-2, 16 KOs) put on a spirited, messy fight equally frustrating and entertaining. Moloney won by wide margins on the scorecards, 97-90, 98-88, and 98-89. Moloney was awarded two knockdowns in the first two rounds after Jimenez was docked a point for hitting late after a referee break. Credit Jimenez for carrying on from a deep hole down three points after two rounds.

Moloney hoped to demoralize Jimenez, pressuring him with bodywork, hoping his team might call it an early night. Jimenez refused, sticking to his game plan while looking for a way to end the fight. The work will pay off for Moloney as he works his way back toward a title shot. Moloney wins a vacant WBO International title, putting him in line as a mandatory challenger for champion Kazuto Ioka of Japan.

“I feel like I'm on a whole new level now. Let's get over to Japan and finish this year as world champions. My brother's going to be world champion soon, and so am I!” said Moloney. Bantamweight Jason Moloney (25-2, 19 KOs) did his part with his victory against Nawapho Kaikanha of Thailand (56-2-1, 46 KOs). Scores read 119-109 and 118-110 X 2. Jason is more economical with his punch output than Andrew. When he could pin the former Muay Thai competitor Kaikanha in place Moloney did some damage, but like his brother, he stood across from a tough veteran who forced him to go 12 rounds. Moloney puts himself in line by winning this WBC eliminator for a possible title fight against the winner of the unification fight between Naoya Inoue and Paul Butler. 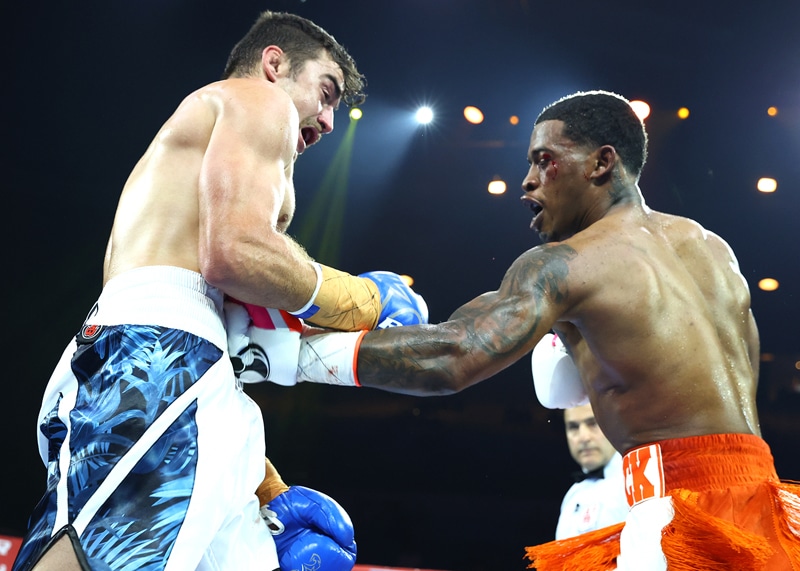 Middleweight prospect Lorenzo Simpson (R) hoped to get back on track with his win over Marcus Heywood after an extended ring absence. Photo: Mikey Williams/Top Rank Inc via Getty Images

Back after a year out of the ring, middleweight prospect Lorenzo “Truck” Simpson of Baltimore (12-0, 7 KOs) won a unanimous decision over Marcus Haywood of New Zealand (6-5-1, 4 KOs). Scores were 58-54 X 2 and 59-53. Simpson worked with Devin Haney's team to prepare for his return Saturday.